SOURCE: ALL ABOUT JAZZ PUBLICITY
December 15, 2009
Sign in to view read count 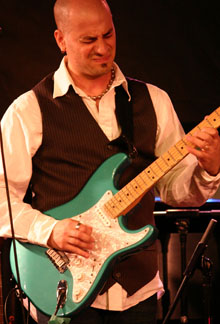 slideshow
B.D. Lenz began his musical journey at 14, when he was first inspired to learn to play the guitar. Since then, he has gone on to study with such jazz luminaries as guitarists Mike Stern and Vic Juris and recently deceased pianist/educator Charlie Banacos. After graduating from the Musician's Institute in Hollywood, California, Lenz finished his formal musical education at the College of New Jersey, where he graduated with honors. Though he finished his scholarly studies years ago, Lenz has furthered his education on bandstands and in recording studios all over the East Coast and beyond.

Lenz has released six recordings as a band leader; he has also performed and recorded with some of the best in the business, including Randy Brecker, Will Lee, Joel Rosenblatt, Mark Egan and Kathy Phillips. His original music can be heard internationally on more than 100 television shows on networks such as MTV, VH1, USA, A&E, Comedy Central and PBS. Lenz has been named as one of the top 20 up-and-coming jazz musicians in New Jersey by The Star-Ledger of Newark, and he was recently featured in The New York Times.

Check out B.D. Lenz: Finding His Own Voice at AAJ today!