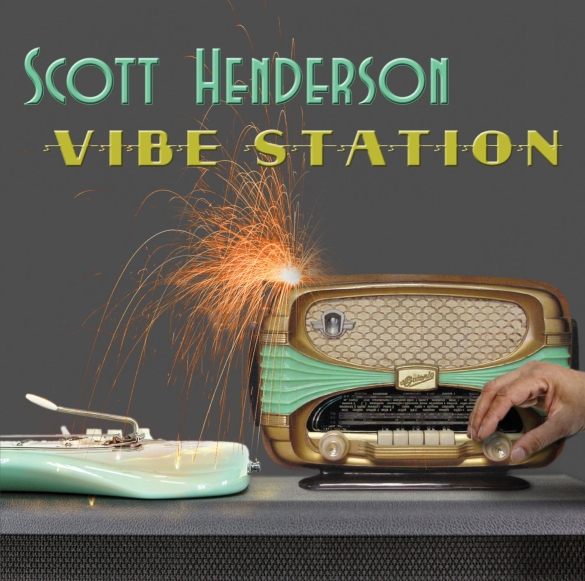 slideshow
Los Angeles, CA – Guitar virtuoso Scott Henderson has finished his new album Vibe Station, the most ambitious project of his career! The highly anticipated instrumental album for guitar trio will be released on May 1, 2015.

Says Scott, “I'm really excited about this record because our trio has been touring a lot and that energy came through on all the performances. The music is still blues-based, but also has a lot of harmonic content. The big change is no vocals, which challenged me as a guitarist to write material which can be played in a vocal way on the guitar, while incorporating my own chord-melody style. I think fans will enjoy the scope of this record because it has elements of blues, rock, jazz and funk. There's something for everyone here.”

Scott also said that the majority of the songs are layered with multi guitar tracks, utilizing many different guitars, pedals, amps and speaker combinations, making it the most textural and versatile sounding album he's ever done. Travis Carlton on bass and Alan Hertz on drums make this project and live show very much groove-based.

Says Scott, “I need to see people moving in their seats. I'm not interested on putting on an intellectual show for musicians only. I don't believe I need to dumb down the music to appeal to people who aren't musicians, because when Travis and Alan play together, the groove is going to attack you whether you're a musician or not”.

Scott Henderson's impressive work over the years as co-leader of the group TRIBAL TECH, leader of his own ground breaking trio, and sideman to some of the best jazz artists of their generation, including the great Joe Zawinul, has elevated him to the front ranks of both Jazz and Blues. Besides being a world class player and premier composer, Scott's trademark is his beautiful tone and striking ability to blend Blues, Rock, Funk, and Jazz, creating a soulful and unique voice on the guitar.

Expect to hear Scott on the top of his game on his April 2015 Europe tour.