SOURCE: ALL ABOUT JAZZ PUBLICITY
March 23, 2009
Sign in to view read count 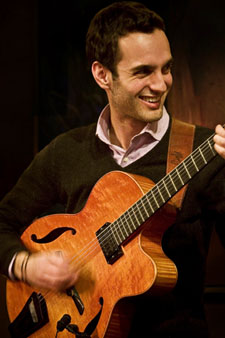 slideshow
A documentary film made in 1996 centers on an eight year-old guitarist who is already a professional and how he mixes that life with everything else, like family and being a kid. At one point, he's shown playing the guitar behind his neck, a la Jimi Hendrix, adroitly picking a melodic line. At another, he lays down some serious blues licks. A voice off camera inquires, “What'cha been listening to lately?" “Lots of Wes Montgomery. Coltrane," the articulate lad intones, matter-of-factly.

The film was Jules at Eight, a 24-minute short by then- fledgling documentary filmmaker Mark Becker, subsequently nominated for an Academy Award. The guitar prodigy was Julian Lage, who started playing professionally in the San Francisco Bay area at the age of seven and who, over the years to his ripe old current age of 21, has played with the likes of Gary Burton, Herbie Hancock, Christian McBride, Mark O'Connor, Frank Vignola and more, and has appeared on Grammy-nominated albums by classy vocalist Nnenna Freelon and his friend, pianist Taylor Eigsti.

Lage's EmArcy debut as a leader, Sounding Point, is being released on Tuesday, March 24, 2009 and AAJ has a number of features today to celebrate Lage's disc hitting the streets.

First, veteran AAJ contributor R.J. DeLuke spoke at length with Lage about how he managed to get to where he is at such a young age. R.J. also spoke with Gary Burton—whose admiration for Lage, and a belief that the guitarist has a particularly bright future, comes through loud and clear. Check out Julian Lage: Stepping Into the Limelight at AAJ today!

You can also read one of the first reviews about Sounding Point, by AAJ Managing Editor John Kelman, also published today at AAJ.

AAJ continues to provide the most exhaustive coverage surrounding new jazz releases. Be sure to check out all our coverage on Julian Lage and Sounding Point at AAJ today!