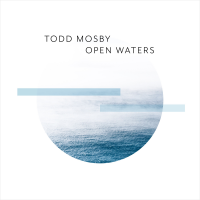 Produced by Windham Hill Records founder, Will Ackerman, and with a sound described as “an album to daydream to," Open Waters finds Mosby once again embarking on a creative journey navigating through elements of Jazz, New Age, Folk and Indian music. “Open Waters is the best project I have been involved with…Todd Mosby is the most unique sounding guitarist I have ever worked with, nobody does what he does…” —Will Ackerman

“This album crosses the full spectrum of the music I have performed and know intimately...from Indian Rag to traditional Jazz to the Police. It's a concept album based upon the story of Atlantis (Plato’s story about the destruction of the ancient civilization), and what survivors may have felt as they escaped from the deluge in ships heading westward.” —Todd Mosby

Coming from a family of inventors [he is the co-inventor of the Imrat guitar], Mosby's early musical DNA was formed from his love of Bluegrass and Folk music, which eventually expanded into Fusion and Jazz. While a college student, Mosby began studying Indian music [namely classical North Indian music], which led to the genre's incorporation into his music, and sparked the creation of the Imrat guitar [a 20 stringed hybrid sitar guitar musical bridge instrument that allows Western musicians to access Eastern melodies and Eastern musicians to access Western harmonies for the first time]. After 13 years of study with Imrat Khan, Mosby became the only guitarist ever admitted into the Imdhad Khani Gharana, India’s most prestigious family of musicians. “This instrument [Imrat guitar] sounds better than a guitar and sounds better than a sitar…it is an instrument for the 21st century.” —Imrat Khan

With more than several accolades and collaborations during his very active career, Mosby has either shared the stage with, or opened up for such luminaries as Michael Manring, Imrat Khan, Foreplay, Spyro Gyra, and several others. He has performed around the world including, Kravis Center (West Palm Beach, FL), The Harris Center (Modesto, CA), Soka University (Aliso Vieja, CA), and many others.

Speaking again on the conceptual nature of the project, Mosby says:

This [the Atlantis reference above] is what I consider an archetype model as well for anyone journeying from one country to another, one city to another or even leaving planet earth to journey into interstellar space for colonization on new worlds. My mission as an artist is to connect with audiences at the spiritual, emotional and physical levels and as such, change lives.”