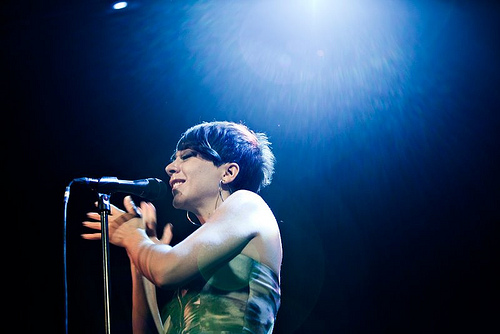 slideshow
Gretchen Parlato is not your stereotypical jazz diva. You won't see this singer up on stage dressed in a prom dress, and her beautiful voice doesn't have the impressive range of other some singers out there. With a short asymmetrical haircut and a hip fashion sense, her look is her own.

Nonetheless, it is Parlato's voice that stands out. She has singular ear for rhythm and phrasing, texture and subtlety. Her sweet spot is a breathy whisper that beckons with the intimacy of a late-night conversation. The singer's talents are impressive enough that she won the influential 2004 Thelonious Monk Institute International Vocal Competition, and both Herbie Hancock and Wayne Shorter have sung her praises.

Now she is seeing the release of her third album, 'The Lost and Found,' which features New York City notables like associate producer Robert Glasper, pianist Taylor Eigsti, saxophonist Dayna Stephens, guitarist/vocalist Alan Hampton, bassist Derrick Hodge and drummer Kendrick Scott. She works regularly with the crème de la crème of the NYC club scene and has established herself as a collaborative singer who likes to be a part of the band, sometimes even blending her voice in with the horn players. It's not the diva way, but Parlato is content to pursue her own artistic goals and let her career have a slow build to it.

“When I won that [Monk] competition I had just moved to New York and I was 27," Parlato tells Spinner. “Now I'm 35. There is a lot of personal growth that happens anyway that we do as human beings. It's a transformation, and it makes sense. Nothing has been overnight—it's been one steady climb. It feels good because I've been able to enjoy the journey along the way."

Born and raised in California by a family of artists and musicians, Parlato has wanted to sing ever since she could remember (Listeners can even hear her earliest attempts as in-between song snippets on her second album, 2009's 'In a Dream'). To refine her approach and technique, she went to an arts high school and studied privately with the great Tierney Sutton.

“I've always had the desire to use my voice in more than a typical way," Parlato says. “But when I think of finding voices or my style, I think more in terms of it finding me. It found me or I allowed it to. I stopped trying to find it. I stopped trying to sound like somebody else. Maybe 15 years ago, you had to sound like Sarah Vaughan or Ella Fitzgerald or somebody else, but not anymore. Now there's Diana Krall and Norah Jones, who knocked that sound out and allowed the singers to sound a little bit more intimate."

Parlato is utterly beguiling on 'The Lost and Found.' She reinterprets songs like Simply Red's 'Holding Back the Years,' turning the soul song into something more melancholy and wistful. Creating the entire track herself, she makes the Brazilian tune 'Alô Alô' dance with overdubbed vocal, light percussion and hand clapping. She also collaborates with various band members and friends on smart post-bop originals like the haunting 'Without a Sound," the poppy acoustic-guitar-driven 'Still' and the moody title track. After writing only a single set of lyrics on her 2005 self-titled debut, she wrote four tunes herself and added lyrics for six others on her latest effort.

“It took me a while to realize I had something to say," Parlato says of her songwriting. “It wasn't until five years ago that I attempted to write a song. I blocked that before, and before my repertoire was standards in the classic sense. I got into bossa nova and people were telling me to do a traditional album of bossa nova or just an album of standards, but I never did. There was something that stopped me from being a standards singer."

Whether covering Bjork on her debut or Stevie Wonder on her second album, Parlato has always looked beyond jazz's established parameters for inspiration. Speaking about music, she talks about projecting moods, feelings or emotions through her songs and lyrics. That's clear even after a cursory listen of her albums, and it's these big-picture ideas that also reflect a deeper more self-assured approach for Parlato.

“I would not have been ready if someone had snatched me up and forced me to put out a lot of albums right away," Parlato points out. “There could have been something there, but emotionally I wasn't ready. Spiritually I wasn't ready. Now I have a sense of peace about where I am. That just sort of happens when you are in your 30s. I'm really enjoying the sense of security and peace of mind that comes at this age."