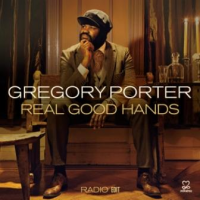 slideshow
Acclaimed Vocalist's Second Grammy Nomination Is for Track from Be Good, His Sophomore Release on Motema Music

Acclaimed vocalist Gregory Porter has received a Grammy nomination in the Best Traditional R&B Performance category for the song “Real Good Hands," a track from his second Motema Music album, Be Good. This marks Porter's second Grammy nomination. His first was in the Best Jazz Vocal Album category for Water, his breakthrough debut album (a rare feat for a debut recording), which was released in 2010 and featured the international hit “1960 What?".

The Grammy nomination caps a year of international accolades for Porter. “Real Good Hands" was selected as iTunes' Single of the Week upon Be Good's February release, propelling the album up the iTunes US Jazz Album chart, where it debuted at #1. At Billboard, Be Good reached #6 on the Jazz Album chart, and #12 on the Heatseekers chart. Starbucks also featured a track off the album, “On My Way to Harlem," as their website Pick of the Week.

Media outlets across the globe have lauded Porter and Be Good. Just this week, Be Good's title track was included on NPR Music's 100 Favorite Songs of 2012. The Huffington Post raved, “His immense talent cannot be ignored." “Be Good signals the arrival of a great jazz artist with long-range staying power," concluded Jazz Times.

Porter's star burns exceptionally bright in the UK and in Europe, where Be Good recently won an Edison Award, the Dutch equivalent of a Grammy, in the Jazz Vocal Album category. He has graced the covers of Jazz Wise, and Jazz Magazine, and has earned critical kudos from the likes of Echoes magazine, which stated “Rarely does musical talent as rich as Gregory Porter come along....Mr. Gregory Porter is the real deal." Be Good was Hi Fi News' Album Choice, with a review that called the album 'Brilliant and compelling," and it was also selected as Jazz FM's Album of the Year.

During his extensive UK and European tours this past year, which regularly sold out, Porter was featured on numerous radio and television shows, and counts such international music superstars as Jamie Cullum and Jules Holland among his fervent supporters.

The success of Be Good comes as little surprise, following closely upon the success of his 2010 debut, Water. That album earned Porter a Best Jazz Vocal Grammy nomination (a rare feat for a debut recording), soared to #1 on both iTunes and Amazon in the UK, and landed on an international array of year-end 'Best Of' lists for 2010 in several genres.

A musical compendium of groove-driven delights, ranging from quiet ballads to up-tempo burners, from romantic charmers to powerful, blues-tinged anthems, Be Good features the core of the powerhouse working band with whom Porter recorded his Grammy®-nominated debut, and who have performed with him for over three years: Chip Crawford on piano, Aaron James on bass, Emanuel Harrold on drums, and Yosuke Sato on alto sax. The album is further fueled by richly emotional horn arrangements by Kamau Kenyatta, who produced Water and who continues to play an important role in Porter's sound. Porter tapped the prodigious talents of veteran producer Brian Bacchus for Be Good. Bacchus, whose A&R successes have included Norah Jones' Grammy® - winning Come Away with Me, has produced projects for such acclaimed jazz artists as Randy Weston, Lizz Wright, Richie Havens, Ronny Jordan, and Patricia Barber.

2013 will find Porter continuing his extensive touring schedule with performances in Canada, Japan, Indonesia and Brazil and at many prominent jazz festivals throughout the world, including the Newport, Playboy, Monterey, San Francisco, Capetown and Johannesburg Jazz Festivals.