Greg Reitan Releases 'Some Other Time' on Sunnyside Records

SOURCE: ALL ABOUT JAZZ PUBLICITY
February 3, 2009
Sign in to view read count 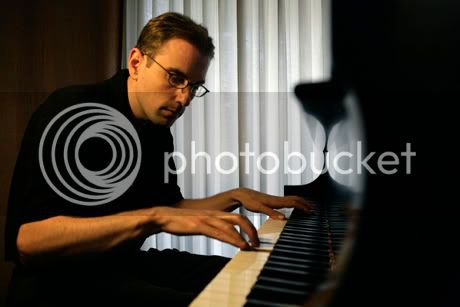 slideshow
“An old-school trio record of the highest order, Greg Reitan's Some Other Time harkens back to the day when great tunes played by a swinging band were reason enough to make an album."


The modern jazz pianist not only has to master the voluminous contributions of the idiom's giants: He must also be conversant with every musical tradition that has crossed the eighty-eight keys. Sunnyside has, more than any other label in this generation, debuted a number of piano virtuosos, from Kirk Lightsey and Armen Donelian, to Aaron Goldberg. And now, the multi-talented and multi-dimensional Seattle-born, Los Angeles-based pianist/composer Greg Reitan unveils his astonishing debut CD, Some Other Time; an expansive twelve track trio recording featuring Reitan's compositions, standards by Cole Porter, Leonard Bernstein, and jazz numbers by Pat Metheny, Bill Evans, Vince Guaraldi, and John Coltrane.

“One of my main goals with Some Other Time was to put together an album that had a kind of overall lyrical elegance to it," he says.

Joining Reitan on his elegant, yet swinging journey, are his long-time bandmates. “My trio on this recording is an important contributor to the music," he says. “Bassist Jack Daro, drummer Dean Koba and I met while in college at the University of Southern California music school. We have performed together on and off for the past 10 years. Because of our relatively long association, we have developed a unique and sympathetic rapport that is constantly evolving. This has allowed us to explore a certain depth in the music."

Indeed, the stylistic depth on this CD offers a good summary of modern and diverse musical styles. And it clearly highlights Reitan's seemingly effortless ability to play those styles, while fully expressing himself in his own pianistic voice, buoyed by a sensitive combo that equally channels the dynamic range of the trio recordings of Ahmad Jamal, Keith Jarrett, and Bill Evans. The Evans imprint manifests itself throughout the CD, with a tasteful, mid-tempo rendition of Cole Porters “All of You," a longing and lyrical look at the title track, written by Leonard Bernstein and delivered with the evocative overtones of Evans' masterpiece, “Peace Piece," and the Chopin-colored, haunting Evans work, “Time Remembered." Other examples of Reitan's interpretational alchemy include his bouncing take on the Beatles' “Dear Prudence," which moves with an infectious Vince Guaraldi meets Ramsey Lewis groove, contrasted by the heartland swing on Pat Metheny's “Unquity Road," and Reitan's waltzy, interactive version of John Coltrane's “Giant Steps." The leader's own compelling compositions, from the wonderful “Joy's Song" to the anthemic “Northern Windows," round out this delightful and dancing disc.

A musician of Greg Reitan's caliber must have a complete and comprehensive musical education to draw from to create such a stylistically broad recording. Born in Seattle, WA, Reitan's interests in music began at the age of ten. “I was fortunate to study with a number of great musicians," he says, '[including] pianists Joni Metcalf, Dave Peck and composer/drummer Jerry Granelli. Summers were spent at the Bud Shank Jazz Workshop at Port Townsend, WA, where I studied composition and arranging John Clayton and pianist Hal Galper." He won two scholarships to Berklee College of Music, and the Kreielsheimer Scholarship at Cornish College of the Arts in Seattle.

Reitan relocated to Los Angeles in 1991, attended the University of Southern Californias Thornton School of Music as a Herb Alpert Merit and Dean's Scholar. He studied with composers Stephen Hartke, Frank Ticheli and Erica Muhl and pianist Terry Trotter. Reitan was a finalist in the John Coltrane Competition, a finalist in the Great American Jazz Piano Competition, and finished second in the 1996 Hennessy Cognac Jazz Search in New York.

Reitan has also been a film composer/producer since 1995. He's worked with Score Productions in New York, and has composed music for ABC, CBS, and CNN. After leaving Score Productions, he composed the original score for the independent film, Dumbarton Bridge, for which he won the Grand Prize for Best Score at the 1999 Providence R.I. Film Festival. In 2001, he formed Evergreen Point Music; an L.A.-based production company, whose clientele includes NBC News, XM Satellite Radio, Warner Bros, and various film projects.

His jazz trio performs frequently on both coasts, and has had a long-standing relationship with the Los Angeles County Museum of Art. In 2000, two of his compositions were featured in the motion picture, Bark, starring Lisa Kudrow, which was an official selection of the Sundance Festival. In 2002, he won the inaugural ASCAP Young Jazz Composer Award for his composition, “Man Overboard", and became an official Steinway Artist that same year. The USC Symphony performed two of his works: Clarinet Concerto: In Three Movements, and Los Angeles Fanfare.

Greg Reitan's debut CD is imbued with his impressive and expansive education and experience, and delivered with the elegance of a master musician. “Creating something 'elegant' was always on my mind." He says. “That is also the center of my thoughts in my approach at the keyboard. I always strive for a warm, round tone and crisp, clean articulation. I also try to keep a certain sense of relaxation in every performance. Even at fast tempos I attempt to give the music a certain gracefulness."

Greg Reitan is a Steinway Artist.