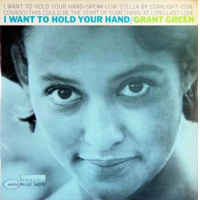 slideshow
Why did guitarist Grant Green record an album for Blue Note in March 1965 entitled I Want to Hold Your Hand? At first blush, it would seem that Alfred Lion was hoping to cash in on Beatlemania. And he was. But there's more to the story. If you listen carefully to the album, which was released in May 1966, you'll notice that many of the songs were taken at roughly the same medium tempo.

Before I explain, a word about the musicians and the songs. For an easy-going album, there were some pretty heavy hitters on the date: Hank Mobley (ts), Larry Young (org), Grant Green (g) and Elvin Jones (d). This was quite a magical quartet. Mobley was a workhorse for Blue Note, Young was making a name for himself as an organ modernist and Jones was with the John Coltrane Quartet at this point. He slipped this Green session in during a rigorous touring and recording schedule.

The answer to the question I posed above can be found in the August and December 1966 issues of Billboard. In the “Coin Machine" section of the trade publication, stories detailed Blue Note's rollout of a new “Little LP" line geared for stereo jukebox play.

Rather than release 45rpm singles, which would have required the label to chop down album songs into 3-minute versions, Blue Note planned to issue two full tracks from their 12-inch albums, one song on each side of a 33 1/3 single. The average length of each side was 7 to 9 minutes, making it an extended play single in common parlance.

As Blue Note's national sales manager Bernie Block said in one of the articles, “The purpose of the Little LPs is to leave the songs as close to the original state as possible. Most of the material has not been edited from the 12-inch LPs."

In the mid-1960s, as the pop-rock craze exploded, adult establishments such as bars were eager for longer jazz instrumentals that could play in the background. Blue Note marketed these extended play Little LPs in packages of four or five records to 2,100 stereo operators nationwide. When the line rolled out in December '66, I Want to Hold Your Hand was backed by Corcovado.

Were there jukeboxes that played 33 1/3 records? There were. The Seeburg Stereo Showcase was one in 1966. Did Blue Note invent the Little LP? Actually, Columbia pioneered the format in 1964 with the rise of adult music on the “easy listening" charts. By 1966, jazz sales were sagging and Blue Note was moving into the adult contemporary market. Stan Getz and Wes Montgomery were already there in 1964 and '65. Grant Green was right behind them.

And here's the entire album...