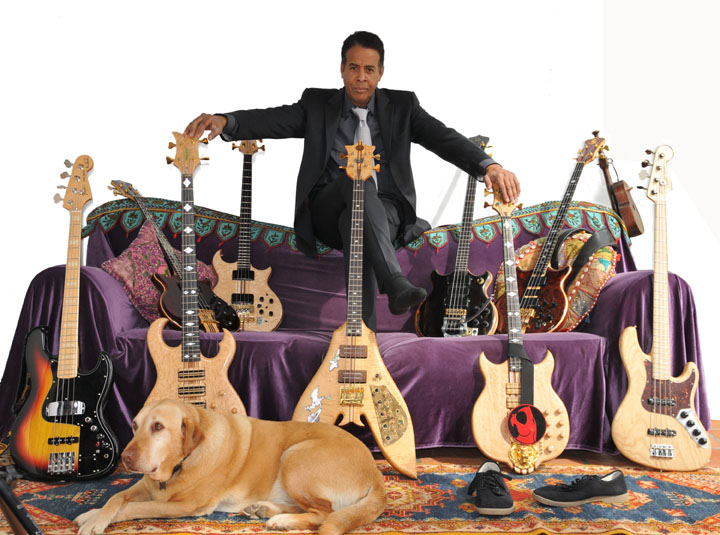 slideshow
Jazz bass legend Stanley Clarke is thrilled to win 2011 Grammy Award for Best Contemporary Jazz Album with his most recent CD, The Stanley Clarke Band, on the Heads Up International, a division of Concord Music Group, and the Roxboro Entertainment Group label. He was also nominated in the category of Best Pop Instrumental Performance, “No Mystery." Clarke is especially pleased because he feels that this album's music is fresh and different from just about anything he's done before. He realized early on in the recording process that the range of collaborative material he was creating with fellow band members would allow him to venture to new levels of experimentation utilizing his arsenal of bass instruments.

Ruslan Sirota and Ronald Bruner, Jr., who were also Grammy winners for their participation on the album, and Stanley's wife, Sofi, accepted the award at Pre-Telecast Grammy Ceremony in Los Angeles at the Staples Center. The Pre-Telecast Gammy Ceremony was streamed “live" internationally at grammy.com.

On hearing the news while in Australia on tour with his seminal group Return To Forever, Clarke stated, “I'm grateful on behalf of the whole band for this honor. It's humbling to be in such strong company. It's so gratifying to see that jazz and instrumental music remain such vibrant and exciting musical forms, and that we could contribute to their vitality. I'd like to thank the members of the Stanley Clarke Band: keyboardist Ruslan Sirota; drummer Ronald Bruner, Jr.; pianist Hiromi Uehara and the rest of the performers on this album. I'd also like to thank my wife Sofi, who's been such a strong supporter of my career, and my children, who are also making their paths in the arts."

The album has garnered outstanding reviews since it's release in June 2010. J. Hayes of Examiner.com states, “Stanley Clarke makes an album of great music with this new band. This is what I believe jazz always should to be: progressive, improvisational, sophisticated music influenced by the experiences, ears, hearts and spirits of the artists making it." Damian Erskine of Bass Musician Magazine adds, “This newest release from icon Stanley Clarke is poised to impress in every way. This may be my favorite of Stanley's lineups. It's got some great grooves, get's funky as hell and shreds just enough (but not too much)."

Not one to rest on the laurels from his various pursuits as a composer, performer and recording artist of 40 albums and 60 film scores, the Fall of 2010 marked Clarke's launch of his own record label, Roxboro Entertainment Group. This business venture includes music publishing for his own and other musicians' work, as well as the development of various projects aimed at music education.

“When you are starting a record company, diversity plays a major role," says Clarke. “All of Roxboro's artists come from various locations in the world and offer remarkable cultural differences."

Roxboro Entertainment Group, unveils its first two releases this month with guitarist Lloyd Gregory's self-titled CD “Lloyd Gregory" and multi-instrumentalist Kennard Ramsey's “Somos." The next two albums on the Roxboro Entertainment Group label are scheduled later in the year. They will be the CDs of keyboardist Sunnie Paxson with “Jazz Divertido" and Ukrainian-born Ruslan Sirota, pianist, arranger and keyboardist, who collaborated on The Stanley Clarke Band with self-titled “Ruslan."

Of the first two releases, Ramsey's new world music inspired “Somos" is an exploration of various music genres. It is influenced by the arrangements and orchestrations that personified the innovation of Verve, CTI and Blue Note era recording artists. Ramsey, an eclectic and often enigmatic Los Angeles based composer/musician, presents compositions that are distinguished by his innovative use of live orchestra, synthesizer and other digital audio media, integrating contemporary music genres with traditional.

A master of both acoustic and electric guitar as well as a musical director who has played and recorded with artists as diverse as Martha Reeves and Gerald Albright, San Francisco-based Lloyd Gregory's smooth, soulful, melodic, and flowing sound evokes unique hints of his extensive R&B roots. In Clarke's words, “He is a sweet warm guy, which comes out in his music. His music reminds me of a modern-day Wes Montgomery."

Clarke looks forward to developing unique avenues of exploration with the Roxboro Entertainment Group. Noting the numerous changes in the music industry from when he began forty years ago—he feels “the sky's the limit!" Clarke's favorite quotation, “A society is only as great as its dreams, and its dreams are dreamed by artists...," is Roxboro Entertainment Group's working model.