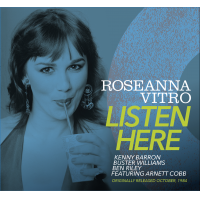 slideshow
Vocalist Roseanna Vitro—performer, recording artist, educator and journalist—reissues Listen Here, the debut album that launched her career. Featuring veteran pianist Kenny Barron, the project ushered into the spotlight a formidable new artist with chops and sensitivity in equal measure – a galvanizing spirit who, having already proven she could move live audiences, now certified her power on vinyl.

Though this is a first recording, Vitro shows herself a mature jazz singer. Representative jazz standards bear that out: “I Love You Madly,” “It Could Happen to You,” “No More Blues” and “You Took Advantage of Me.” She swings and emotes and surrenders herself in the service of the music. She is filled with life.

Her subsequent efforts underscored the point. Following Listen Here, she waxed a number of albums that re-imagined the works of popular music’s greatest songwriters and stylists – among them, Ray Charles, Bill Evans, Clare Fischer and Randy Newman. It was through the latter’s artful song narratives that Vitro earned a Grammy nomination (The Music Of Randy Newman).

Vitro bravely ventured through the Americana of her blues and jazz roots, through the music of Brazil. Along the way, she distinguished herself in a host of group configurations—from duets to big bands.

Hailing from Hot Springs, Arkansas, Vitro began singing professionally in Houston. She soon found herself as a protégé of tenor player Arnett Cobb and singer- educator Ray Sullenger. She became a regular on the Houston jazz scene. Ultimately, she landed a steady gig at the Green Room, where she

Vitro decided to re-release Listen Here because the time was right. She and her husband Paul Wickliffe, an accomplished sound engineer with a storied career, recently became grandparents. Their perspective has changed. “It was time to take stock of my life and look back at my career,” she says. “Some of my earlier records were never transferred to a digital format, so they are no longer available. And many reviewers and DJs who have known me over the years have moved on. I think these early recordings stand the test of time, and I want to introduce them to a new generation.”

In the meantime, she continues to imagine projects and opportunities that help fulfill her belief in music’s ability to heal. As ever, she seeks to reach people.

Esteemed jazz journalist Neil Tesser said in USA Today, “Roseanna can sing rings around half the vocalists you can name. Her warm, confident clarity of tone is immediately noticeable, but most startling is her boldness of phrasing.” He might have added, “her unerring talent for finding the truth—through song, through the communal experience of sharing it.” The evidence can be heard easily. Listen Here.