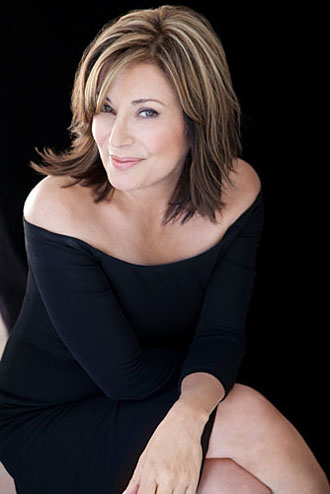 slideshow
Los Angeles-based vocalist Denise Donatelli won a Grammy nomination with her second Savant CD, When Lights Are Low (Savant SCD 2109). An East Coast native and a recipient of classical piano training, she turned to singing jazz, wound up relocating to the West Coast and has pursued her performance and recording career ever since.  Possessing a voice of exceptional nuance, agility and unerring pitch, Denise is able to imbue whatever she chooses to sing with her special warmth, wit and insight.  Reuniting the Grammy-nominated duo of Denise and her Music Director / arranger / accompanist Geoffrey Keezer, Savant Records presents their latest collaboration.  Together, with a pride of the best studio men on the West Coast, Denise offers a stunning program of un-hackneyed tunes by Peter Eldridge, Sting, Pomplamoose and others while Geoffrey Keezer provides the interesting arrangements and scoring that have come to be synonymous with a Denise Donatelli recording.

Denise Donatelli, the GRAMMY nominated and critically acclaimed award winning Savant recording artist, has become one of today's premiere jazz vocalists. Her 2010 release When Lights are Low—which received two GRAMMY nominations, one for Best Jazz Vocal Album and another for Best Arrangement Accompanying a Vocalist for pianist and collaborator Geoffrey Keezer for his arrangement of “Don't Explain"—confirms Denise's status in the upper echelons of talented and engaging jazz artists in the country.

Denise's fourth recording, Soul Shadows is scheduled for release by Savant Records on September 11, 2012 and in October, Denise will be honored by the Los Angeles Jazz Society with the 2012 Jazz Vocalist of the Year award.

Denise´s innate musicianship and pure tone have won her spots singing for episodes of The Simpsons, television promos for Frasier, Card Sharks and Turner Classic Movies and has appeared in national and international commercials for CNN, Hyundai, Lexus and Mercedes-Benz among others.

Growing up in Allentown, Pennsylvania, Denise's talent was discovered at the early age of three when she plunked out Silent Night on the family piano. Realizing their daughter's inherent musical talent, the city's leading instructor was contacted and by the age of four, Denise began studying classical piano.  She was an active member of the Allentown Music Club along with area musicians including jazz pianist Keith Jarrett.  She garnered numerous 'Superior' awards for her piano performances in the National Federation of Music Club's regional piano competitions.  While piano study was a major part of Denise's musical background, she always loved to sing and soon realized that her true passion was jazz and popular music.

Placing her musical career aside in favor of motherhood, Denise found her voice again years later after relocating to Atlanta, Georgia.  It wasn't long before she became immersed in Atlanta's jazz scene working by day at Turner Broadcasting System and singing at night with a jazz trio at the Ritz Carlton Hotel.