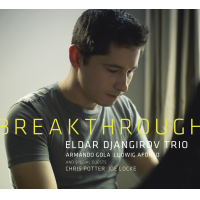 slideshow
"A sparkling command of the instrument." &#151Chick Corea

Few artists could record two albums over the course of one week in different musical genres, with disparate personnel, and at separate studios. Yet New York City-based pianist Eldar Djangirov has done just that, and proven himself musically ambidextrous as evidenced by two remarkable, self-produced recordings for his debut on the maverick, multi-Grammy nominated Motéma Music, which were released in April and May.

Eldar's Breakthrough, recorded at Avatar Studios in New York City, was released on April 9. Like the 26-year-old's 2009 disc Virtue, it features his long-standing touring trio with bassist Armando Gola and drummer Ludwig Afonso. Breakthrough breaks through to reinforce just how powerful and poignant a road tested jazz trio of young lions can be.

“There's a special connection within this trio," Eldar says. “It feels like we're all playing one single instrument." All the more remarkable as this youthful unit plays at exhilarating speeds and yet maintains a distinctly heartfelt touch.

Bach/Brahms/Prokofiev, recorded solo at Manhattan Center Studios and released on May 14, marks the pianist's second solo release, and his debut album in the classical genre. It expands, with fervor and finesse, upon the much-lauded classical pieces interspersed on Eldar's 2011 solo piano debut Three Stories. Chronological, it captures Bach's 1720s playfulness on “Partita #2 in C minor, BWV 826" and Brahms' 1870s harmony on “Eight Piano Pieces, Op. 76." Eldar, a native of the former Soviet Union, further showcases his roots through Prokofiev's “Sonata #7 in Bb major, Op. 83" from the 1940s.

These two new recordings illustrate a combination of musical logic and abandon that is singularly Eldar — and mark a major breakthrough by this popular piano star.