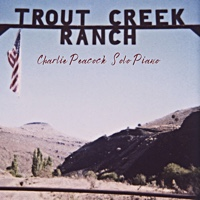 slideshow
A unique collection of solo piano compositions and improvisations from the producer of Chris Cornell, The Civil Wars, Holly Williams, Ben Rector, Ladysmith Black Mambazo, and The Lone Bellow.

As the sonic architect behind the best-selling music duo, The Civil Wars, Peacock is largely known for his deft and moving productions, including “Misery Chain” by the late Chris Cornell from the soundtrack of Twelve Years a Slave and “Hush” the title theme to the AMC drama Turn: Washington’s Spies featuring Joy Williams and The National’s Matt Berninger.

Though it’s been decades since impresarios “Bill Graham and Chris Blackwell plucked him from the San Francisco punk/pop underground and pegged him for stardom” (Keyboard), Peacock often steers clear of the mainstream (despite his significant mainstream success). In 2014, Peacock explained it this way:

“I’ve never been one to put too much stock in commercial peaks. Thankfully (as a producer and songwriter) I’ve had several, but I’ve always been after a lasting career—one that never peaks— just gets better. Artists I admire, like Louis Armstrong, Duke Ellington, Johnny Cash, Willie Nelson, and Herbie Hancock have that kind of career story—basically a life of making music rooted in America, and that’s a music I know and love.”

“I was raised by a California-born, improvising, trumpet-playing father whose grandfather was a Louisiana fiddler. Maybe that explains a little of my ability to move fluidly between several varieties of American music, whether it’s rooted in Hank Williams or Miles Davis.”

Peacock followed his 2005 jazz debut, Love Press Ex-Curio (featuring Ravi Coltrane, James Genus, and Joey Baron) with Arc of the Circle (2008), an improvisational duets record with saxophonist Jeff Coffin featuring contributions from Marc Ribot and Derrek Phillips. Peacock’s previous solo piano outing, Lemonade, was released in 2014 and peaked at #4 on the Billboard Jazz Chart. All of Peacock’s jazz recordings have charted Top 5 on iTunes and Amazon, including 2018’s When Light Flashes featuring Jeff Coffin, Ben Perowsky, Felix Pastorius, Hilmar Jensson, and Matt White. In 2020, Peacock collaborated with bassist Steve Swallow on the single, “After All These Years” and yMusic Ensemble members, CJ Camerieri and Gabriel Cabezas on “Surprised Me Too.”

“There’s no hiding that I’ve been affected by Keith Jarrett’s seminal solo piano improvisations, Facing You from 1972. I’m proud to be of the generation of musicians that grew up on that amazing record. Andrew Hill’s Point of Departure was also essential listening. I spent a day with Andrew in the late '70s and that was life changing. Even with the obvious influences, I’ve tried to do something a little different with the left hand by outlining chords in 5ths and 6ths and avoiding the jazz pedagogy voicings we all learned back in the day. As a record producer I usually produce much simpler, less harmonically dense music. This has helped me be content with harmony that floats seamlessly between simplicity and complexity, and maybe sounds a little less like a particular time in history. That’s what I hope for.”

“There’s a reason Nashville is called Music City. It’s about music first here, and improvisation, whether it’s jazz, bluegrass, or rock related, is absolutely central to the music created in our city—a city full of world-class improvisers. My solo piano record and playing is hardly an anomaly. It’s simply my version of what friends Jerry Douglas, Vince Gill, and Andy Leftwich do in their own sphere of influence. I had my pivotal experience with Keith Jarrett when I was seventeen. I’m hoping my record will spark imaginations and remind people that this is what musicians do – the music is inside us, and when we improvise, we are composing on the spot, real-time. I’m just doing my small part to tell that story, keep it alive. And if people dig what I do, I hope they will check out some serious mastery in pianists like Vijay Ayer, Uri Caine, and Brad Mehldau.”

“A mainstay of the Nashville music scene Charlie Peacock is one of the most prolific cultural influencers to come out of Nashville.” —Brite Revolution

“Peacock's brilliant feel on the keyboards guides the music to all the right places, seemingly effortlessly.” —All About Jazz