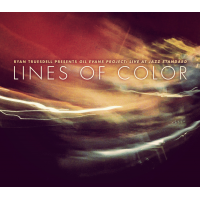 slideshow
The Gil Evans Project's live album, Lines of Color, is now available for download from the ArtistShare site and available for pre-order on iTunes. The band was nominated for three Grammy awards in 2013, and their first album, Centennial, won Gil a Grammy Award for Best Instrumental Arrangement. The ensemble also won two JJA Jazz Awards, record of the year and Large Ensemble of the Year.

This new live recording took place May 13-18th, 2014, for the Gil Evans Project’s fourth–annual, weeklong engagement at the Jazz Standard in New York City. During these sets, Ryan Truesdell and the Gil Evans Project performed a wide range of Gil’s music, from the arrangements he did for the Claude Thornhill Orchestra in the 1940’s, to the music written for numerous recording sessions throughout the late-60’s. They even performed many recently discovered works, previously un-recorded and heard for the first time during this historic concert.