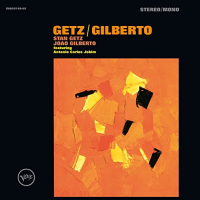 slideshow
Stan Getz was born on this date in 1927. The day has an hour or so to go in this time zone, so before it expires, let’s listen to one of the master tenor saxophonist’s great collaborations. He and the bossa nova pioneer Joao Gilberto teamed up for a 1963 album whose title consisted of their last names. It quickly became a hit at a time when conventional wisdom concluded that rock and roll had forced jazz off the charts.

What was in great part responsible for the album’s enormous popularity was the Getz/Gilberto version of Antonio Carlos Jobim’s “The Girl From Ipanema.” Jobim plays piano on the album. The guest vocalist, added at Getz’s insistence and over the objections of her husband and Jobim, was Gilberto’s wife Astrud. Her previous singing experience was largely at home. Despite her tendency to sing a bit flat, the charm of her vocals on “The Girl From Ipanema” and Jobim’s “Corcovado” captivated radio listeners and record buyers. Getz’s solo on “Ipanema” was a reminder of the expressiveness and subtle power of which he was capable. From my notes for the 1997 reissue of Getz/Gilberto:

Getz/Gilberto quickly achieved gold status. The National Academy of Recording Arts and Sciences inducted it into its Hall Of Fame for recordings. The people inducted it into their hearts. As long as unyielding avarice rules the pop record business, it is unlikely that a jazz album will again dominate the charts. Until the millennium, however, we have this imperishable reminder that it is possible for art music to kindle a response so universal that it becomes an indispensible element of the cultural environment.

We are sixteen years and a month into the new millenium. Unless I’ve missed it, a jazz phenomenon of this magnitude has not appeared. Stan Getz died in 1991.