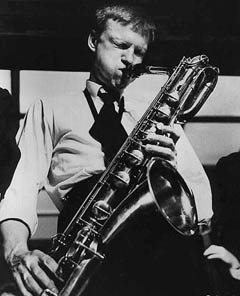 SPECIAL EVENING CELEBRATES THE CREATION OF THE GERRY & FRANCA MULLIGAN SCHOLARSHIP; FIRST RECIPIENT IS JUILLIARD SAXOPHONIST JORDAN PETTAY ONE OF GERRY MULLIGAN'S BARITONE SAXOPHONES TO BE DONATED TO JUILLIARD

FREE tickets will be available beginning February 15 at the Janet and Leonard Kramer Box Office at Juilliard. Box Office hours are Monday through Friday from 11 AM to 6 PM. For further information, call (212) 769-7406 or go to www.juilliard.edu.

Gerry Mulligan (1927-1996) occupies a unique place in the American musical scene. As arranger, composer, saxophonist, and conductor, he played a vital role in the history of modern jazz and contemporary music. As one of the great jazz innovators, his writing and playing influenced entire stylistic movements, including both “cool jazz" and “bossa nova." Gerry Mulligan performed with such jazz immortals as Louis Armstrong, Count Basie, Lester Young, Duke Ellington, Miles Davis, Jack Teagarden, Dave Brubeck, and Billie Holiday. He also wrote for musicals, symphony orchestra, and chamber orchestra. He was consistently voted number one in jazz polls around the world and won a record twenty-nine consecutive DownBeat Readers Poll Awards. In 1999, the Library of Congress celebrated the opening of the permanent exhibit of the Gerry Mulligan Collection, housed in a special room at the entrance to the Performing Arts Reading Room in the Music Division, in the James Madison Memorial Building.