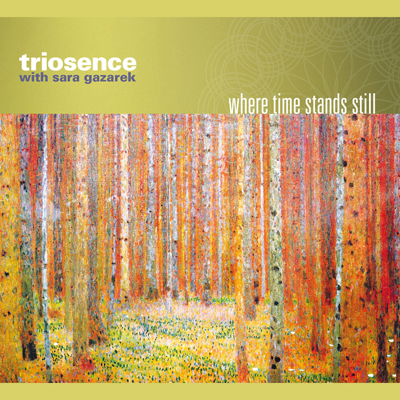 slideshow
While the instrumental group Triosence has already built a strong following over the past decade in Germany, their latest outing promises to attract Stateside attention for the first time. For Where Time Stands Still, the group reached out to Seattle-born singer Sara Gazarek, a rising star on the contemporary jazz scene in the States. The resulting collaboration is a match made in heaven, with Gazarek's crystalline vocals and evocative lyrics supplying an even more personal touch to Triosence's appealing sound.

Formed in 1999, Triosence won several awards as rising stars on Germany's jazz scene. Led by pianist and principal composer Bernhard Schuler, the highly interactive group featuring bassist Ingo Senst (a veteran and in-demand sideman in Germany) and drummer Stephan Emig artfully blends elements of jazz, fusion, folk and world musics into a signature sound that is at once lyrical, dreamy and invigorating. The idea of collaborating with Gazarek came up a few years ago. As she recalls, “ I received an email from Bernhard expressing his interest in having me join them for this project. I didn't take his email very seriously at first, mostly because he was in Germany and I was in Los Angeles, so it seemed unlikely that the project could ever take off. But I completely underestimated Bernhard's drive and determination. After about three months of emails back and forth, it started to seem like a possibility. Then we began the creative process of getting the music and lyrics together, and it just took off from there."

With three of her own albums as a leader (2005's Yours, 2006's Live at the Jazz Bakery and 2007's Return to You, all on Native Language Music) as well as featured appearances on albums by her colleagues (including Josh Nelson's Anticipation and Let It Go), Gazarek has established a reputation on the West Coast jazz scene. She was brought Schuler's attention by guitarist Frank Haunschild, who ultimately appeared as a special guest on Where Time Stands Still. “Frank was my professor in jazz theory class at the Music Conservatory of Cologne, where I studied jazz piano," says Schuler, who also cites Keith Jarrett, Bill Evans, Brad Mehldau, Pat Metheny and Sting as significant influences. “One day I told him that I had been looking for a female singer for some time now to record some vocal songs I had written over the last few years and asked him if he knew someone or had an ideas. He lent me a couple of CDs with singers and one amongst them was Yours by Sara. I instantly fell in love with this recording and Sara as a singer. I had the feeling that she could be a perfect match to my songs. I was looking for a pure and clear and, of course, very beautiful voice. And Sara was just all that."

On Where Time Stands Still, Gazarek's pristine vocals imbue such lovely tunes as the gently swinging jazz waltz “You're My Spring," the intimate and dramatic “Like the Wind" and the tender title track. Her breezy, fresh style invigorates the upbeat “Summer Song" (which carries a trace of son montuno groove in Schuler's piano comping), the buoyant reggae one-drop opener “I Can't Explain" and the Metheny-esque heartland number “Morning Star." She sets an alluring tone with an intimate voice-bass intro to “Only One Evening" before the full band enters without breaking the romantic spell. Her stark a cappella intro sets an evocative tone on “Maybe There's A Princess Waiting," which is underscored by Emig's sensitive brushwork and features an outstanding bass solo from Senst. “Only Friends" is a smooth jazz anthem that will instantly connect with Dave Grusin fans while the stirring and elegantly swinging “You'll See You," featuring a whirlwind drum solo by Emig, may also provide listeners with some food for thought. Elsewhere, Gazarek touches a tender note on “You Alone," underscored by piano, acoustic guitar and udu drum, and she strikes a life-affirming chord on the buoyant “Let It In."

Originally, Schuler had written lyrics himself to all of the songs he composed for Where Time Stands Still. But as he explains, “I later felt that it would be wise to have some of them re-written by a native English speaker. So Sara and I ended up working for several months via email, telephone and skype on the lyrics. On some songs we challenged each other with ideas and wrote new lyrics together. Some songs Sara just mended the grammar a bit, others she re-wrote completely by herself, like 'Summer Song' or 'You'll See You.'"

Schuler explains that the stylistic direction of Triosence has shifted somewhat since the band's inception. “When I started the band in 1999 I was very much into exploring the aspects of modern jazz. During college I wanted to use many complex harmonies and rhythms in my music. I mean, that's what you learn when you study jazz and that's what most jazz players like to do. Later I figured that music doesn't need to be as sophisticated as possible but rather as beautiful as possible in order to touch people. And that's what I want to do with my music now. I still use complex chords, meter changes and so on, but only to serve the melodies and the songs. It's always my goal to make complicated things sound simple and accessible. But since the complicated things are still there in the music it gives it more depth and meaning."

That's a perfect way to describe the richly rewarding music on Where Time Stands Still. It's lyrical and eminently accessible, but when you listen more carefully you can discover little gems hidden in the fabric of this very appealing music.