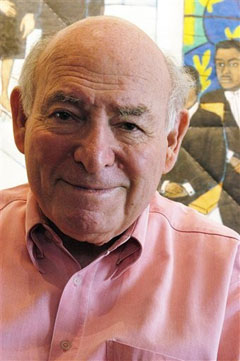 NEW YORK, NY: Eighty-eight. It’s a number that in China conveys good fortune. For ham radio operators “88” is shorthand for hugs and kisses. Astronomers will tell you that there are eighty-eight constellations in the sky. But for George Wein that number hits a little closer to home. This October, the world-renowned jazz and music impresario will be celebrating his 88th birthday. The celebration includes George Wein: The Life of a Legend, a two-night run at Jazz at Lincoln Center’s The Allen Room on October 3 and 4, at 7:00 pm.

Perhaps it’s no coincidence that when, in 1950, Wein opened a jazz club in Boston, he called it Storyville – because from almost that minute on, his life indeed became storied. But it was in 1954 when the story made a turn toward the legendary. On a July weekend in Rhode Island, Wein took an idea and made it into a reality when he produced the inaugural Newport Jazz Festival®. That first festival kicked off with Stan Kenton, and for the balance of the schedule featured performances from the likes of Dizzy Gillespie, Ella Fitzgerald, and Billie Holiday.

From that weekend forward, Wein forever changed how we experienced jazz. He showcased the legends. He gave voice to the up-and-comers. He organized the stages into a setting that took the event beyond being a concert and instead into a shared experience. But it didn’t end there. In subsequent years, Wein went on to produce myriad festivals, including the Newport Folk Festival®, the JVC Jazz Festival, the New Orleans Jazz & Heritage Festival, and the Grand Parade du Jazz in Nice, France. But Wein’s first love has always remained in Newport. And to ensure that his jazz and folk festivals continue long into the future, Wein, in 2011, formed the Newport Festivals Foundation, Inc.™, a 501 (c) (3) organization comprised of a group of dedicated music lovers and patrons of the arts whose commitment both is to grow and to preserve the cultural legacy of the festivals. So make no mistake, George Wein’s intent and vision is more alive than ever. In fact, in August 2014, that idea that was first realized on a chilly Newport night in 1954 will be celebrating its 60th anniversary.

In those early days at Storyville, the word already was out about George Wein being an accomplished pianist – one meant to be taken seriously. More than six decades later, he still packs the clubs. And this October 3 and 4 at Jazz at Lincoln Center’s The Allen Room, George Wein will be at the piano to celebrate his 88th birthday. Joining Wein will be his beloved Newport All Stars: Lew Tabackin, Randy Brecker, Anat Cohen,  Howard Alden, Peter Washington, and Lewis Nash. New York Times writer and music critic, Nate Chinen, will serve as the celebration’s host. It will be an evening that honors George Wein through sharing what means the most to him—a life fueled by music.

Eighty-eight. It may mean many things across many cultures. But for George Wein it’s a number with one more significant tie. “Eighty-eight keys on the piano, ” he explains. “That’s what the number means most to me. And from those 88 keys come an infinite amount of musical possibilities. So, man, that’s a number worth celebrating!”