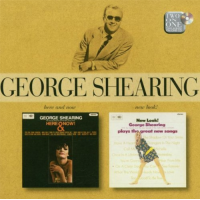 slideshow
So much of George Shearing's extensive Capitol catalog is disappointing. I'm not complaining about Shearing's playing, which was mostly lively and thoughtful. Rather, it's the unevenness of his individual albums during this period and from one album to the next. It's almost as if the suits at Capitol had no clue what sounded good and what sounded lousy. For example, Burnished Brass in 1958 is good while Satin Brass, which came next in '59, is an auto accident of blaring horns and Shearing's quintet meekly struggling to be heard. Part of the problem, I suspect, was Capitol's pop mission in the 1950s and Shearing's proclivity for kitschy fugues and minuets and probable boredom.

With the start of the 1960s, Shearing accompanied Nancy Wilson, Nat King Cole and Cannonball Adderley, only to slip back into stuff like Deep Velvet in '64. Then in 1965, something happened. Producer Dave Cavanaugh (above) was likely under pressure to enter the pop-rock and Broadway-musical eras. In those changing times, Shearing finally shifted away from the American songbook (was there anything left to record?) and arranged and recorded his interpretations of the younger sound with strings and brass.

While the albums Here & Now! (1965) and New Look (1966) still aren't perfect (the Shearing search continues), they are a vast improvement over earlier albums that wallowed in the dreary and the familiar. In some cases, it felt like Shearing was trapped in some maddening house of mirrors where he was doomed to play the same songs over and over again.

On these '60s recordings, we have brilliant and swinging arrangements by Shearing of Call Me, You're Gonna Hear From Me, Who Can I Turn To, Mr. Lucky, The Girl From Ipanema, Bluesette and What Kind of Fool Am I not to mention others. In this regard, I wish Shearing had teamed with Gary McFarland on a pop-rock album or two given what McFarland pulled off.

As for Shearing Today! and George Shearing: Fool on the Hill, the last of his Capitol studio recordings in 1968 and '69, respectively, things, naturally went overboard and downhill. The former had a syrupy choir attached with odd percussion and the latter borders on exotica. Well, fun while it lasted.

JazzWax tracks: I don't think these two albums are available as downloads but they are available on CD as a British two-fer here.

Here's “On a Clear Day You Can See Forever“ from New Look.