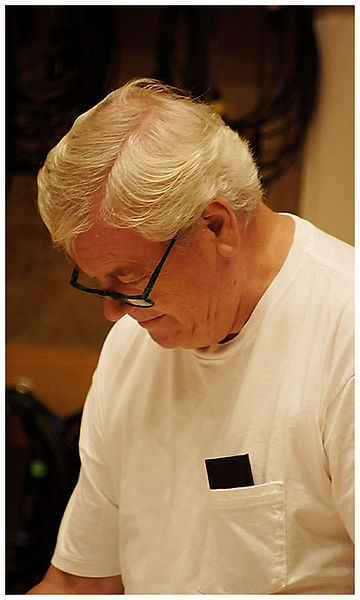 slideshow
The death of George Gruntz last Thursday brought responses from dozens of the musicians who played in his Concert Jazz Band over the past 40 years. The Swiss pianist, composer and arranger hired an international who’s-who of players for his annual tours in Europe, the United States and South America, among other places around the globe. To name a few, his sidemen or guest soloists included established stars like Elvin Jones, Jimmy Knepper, Dexter Gordon, Sheila Jordan and Herb Geller.

Bassist Bill Crow did not appear with the CJB, but he was impressed with the pianist long before Gruntz organized his big band. Bill sent this recollection:

Dave Bailey and I met young George Grunz at a jam session in Switzerland while touring with the Gerry Mulligan quartet in the fifties. We liked the way he played, and later, in Milano, when we were hired for a record session with Lars Gullin, we recommended George, and they flew him down for the date. We thought the music turned out well, but for some reason the recording was never released, as far as I know. RIP, George.

The Jepsen discography shows that the session Bill mentions was recorded by a label called General Jazz on June 13, 1959 with Gruntz, Crow on bass and Bailey on drums. It lists two blues and six standard tunes as “unissued.” I have been unable to find any other trace of the date.

Marvin Stamm became a key member of the Gruntz organization, playing lead trumpet and frequently assigned crucial solo spots. At my request, Marvin wrote for Rifftides about his Gruntz experience.

My Friend George By Marvin Stamm

George formed relationships with many great musicians over his career. I know that I am not alone feeling bereft of a dear friend.

I didn’t realize in 1987, when I first went to Switzerland to work with George and the CJB that it would lead me to change the course of my life. That tour and the ones that followed made me realize that I wanted to leave the studio scene in NYC to return to the life of a jazz artist, the life I loved, my reason to be a musician. Since I made that change in 1990, the subsequent years have been most fulfilling for me both musically and personally. I owe much to George for my decision to make this life-changing move.

But just as important and rewarding has been the friendship that accompanied the musical relationship. Over our time together, George, his wife Lilly, and his daughter Philine also became friends with my wife and daughters. And I have become close to George’s son Felix and his wife Valentina. All these personal ties meant a lot to me and my family, and we value so much all the times spent together and all the experiences we shared over all the years.

I joined the George Gruntz Concert Jazz Band (CJB) in 1987 and was with George steadily for twenty-one years, the exceptions being a two-year hiatus in the mid-1990’s and my missing a couple of tours because of previous bookings. During that time, I was George’s lead trumpet player, beginning in 1987 through the 2008 tour to Russia.

As is true of all the players on the band, I was also a soloist with the group. Every player on the band was a soloist, and George’s policy was that the book he wrote for each tour must include two solos for every player, something that showed his great respect for the musicians he asked to tour with the CJB. There were many of them. Over the years, George had a Who’s Who of players in the CJB, and if you might be interested to see who these musicians were, go to the link Tom Varner provides above.

George was a restless soul, and he was never idle. He was a prolific composer, arranger, and musician and was always creating. When he finished one tour or project, either writing or playing, he was on to the next. George was an eclectic musician, very sincere and serious about his writing. Over the years, I experienced a great many musical sides of George, the many shifts in style, texture and colors in his writing. Each tour of the CJB featured a number of George’s original pieces, but also several arrangements of compositions of the then current members of the CJB. I was highly complimented that in the later years of my tenure on the band, George arranged, performed, and recorded three of my pieces. Moreover, the two soloists featured on those arrangements were always George and me.

George and I shared many one-on-one times, all great fun, wonderful moments. Staying at his the cottage in the Bernese Oberlands between tours in the early years, on the road sharing meals together, and the occasional special wines shared with his boyhood friend and manager of many years, Gerard Lüll. So many special moments together, and, for sure, I will miss them all.

George had a great sense of humor. I will share one of many stories with you. During one of the last tours I played, he and I decided to walk back to our hotel from whatever after-concert function we attended. It was dark. George suddenly tripped and fell from a high curb, scratching his face rather badly and leaving him looking as if he had been in a fight. The next day, I jokingly said to him, “George, let’s tell everyone that we came upon a pair of hoodlums harassing two women, and we jumped in to rescue the ladies.”

George laughed. He said that was a splendid idea. I thought he might only joke about it with the musicians, nothing more. Instead, each night of the remaining three or four dates of the tour, George explained to the audiences why his face was so banged up – that he and I had gotten into a scuffle with a couple of hoods and rescued two damsels in distress. The audience loved it. George and I got a big kick out of it too.

George was generous. He loved good food and wine, as did most of the members of the CJB. The group shared many excellent meals together. We would pay for our food, but many times George would pick up the bill for our wine and drinks.

I was taken aback and quite sad when I heard that George became seriously ill this past fall. I knew he had dealt with various health issues over the past few years, but never imagined things to be this serious. Regardless, George journeyed to the U.S. last December to record again with the CJB. I was not involved, but Howard Johnson told me that the music was very good and George’s spirits were fine although he wasn’t as physically strong as before his illness. I don’t think anyone expected what happened last week. I’m sure that all who knew George are deeply saddened by his passing.

George had a great impact on my life, and I will always keep him in my thoughts. I will always carry a picture in my mind of George onstage at the piano, the image that represents who he was to me during all the times we performed together. He will always be an important and living presence to me.

Rest in peace, my friend.

To see and hear an hour-and-a-half concert by the George Gruntz Concert Jazz Band, with Marvin Stamm as a soloist, go here.