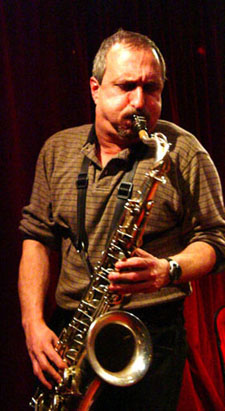 George Garzone is a renowned saxophonist and jazz educator residing in the Boston, Massachusetts area. Garzone is a member of The Fringe, a jazz trio founded in 1972 that includes bassist John Lockwood and drummer Bob Gullotti, that performs regularly in the Boston area and has toured world wide. The group has released several albums. A veteran jazzman, Garzone has appeared on dozens of recordings. He began playing the tenor saxophone when he was six, played in a family band and attended music school in Boston, where he studied under the legendary saxophone master Joe Viola. In addition Garzone has guested in many situations, touring Europe with Jamaaladeen Tacuma and performing with Danilo Perez, Joe Lovano, Jack DeJohnette, Rachel Z and John Patitucci among others. Garzone has pioneered the triadic chromatic approach and students of his have included Joshua Redman, Branford Marsalis, Teadross Avery, Luciana Souza, Mark Turner, Donny McCaslin and Danilo Prez, to name a few.

In 1995 he recorded a fine tribute to Stan Getz on NYC called Alone; Four's and Two's followed a year later with compatriot Joe Lovano which earned him four stars in Downbeat magazine, and in 1999 Garzone returned with Moodiology. Fringe in New York was released in summer 2000. He is a member of the Grammy-winning Joe Lovano Nonet, and performed and recorded with this group at the Village Vanguard in September 2002.

As a performer, Dave Schroeder's main musical focus has been leading the eclectic New York City-based ensemble, Combo Nuvo, where he displays his skills on multiple woodwinds and composition. In addition to his own group, he has performed and/or recorded with a wide array of artists including Teo Macero, Larry Coryell, Airto Moreira, Oscar Castro-Neves, Lee Konitz, Don Friedman, and Kenny Werner.