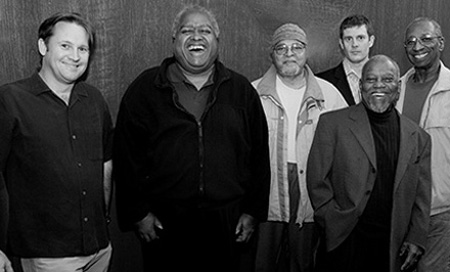 (San Francisco, CA) The Generations Band, an all-star sextet featuring Jimmy Cobb, Eric Alexander, Andrew Speight, David Hazeltine and Ray Drummond, will make its return to Yoshi’s San Francisco for two nights of special event concerts on Wednesday and Thursday, May 6 and 7, 2009. In addition, trumpeter Jeremy Pelt will be sitting in for regular Generations band member Terrell Stafford. On Wednesday night, the Generations Band will offer two full-length sets of extraordinary jazz. On Thursday night, they will perform along with the two finalist bands of the second annual Generations Jazz Program International Competition for Emerging Jazz Combos in a dramatic “Battle of the Combos” to determine the winner of this unique competition.

Two sets by all-star Generations ensemble on Wednesday night, May 6

A multi-generational, power-laden group, the Generations Band has been performing together on a semi-regular basis for over a year. Brought together to serve as ambassadors and teachers for the International Center for the Arts at San Francisco State University’s Generations Jazz mentorship program, the Generations Band quickly coalesced into a fluid yet hard-hitting post-bop ensemble. In 2008 they released their first CD, Tough Guys, on the ICA label. The band was in San Francisco this past February for a series of workshops on college and high school campuses across the Bay Area. If their performance at Knuth Hall on the SF State campus that week gives any indication, their two-set Wednesday night show at Yoshi’s SF is going to throw off sparks aplenty. There will be two sets, at 8:00 and 10:00 pm. Tickets are $20.00 per set.

Two young bands square off in “Battle of the Combos” on Thursday night, May 7

The Ken Fowser/Bhen Gillece Quintet brings impressive experience and a breadth of accomplishment to the Generations Competition. Led by tenor saxophonist Ken Fowser and vibraphonist Behn Gillece, the group recently celebrated their first CD, Full View, with a release party at Small’s Jazz Club in New York City, where Fowser also runs a weekly Tuesday night jam session. Fowser and Gillece are both from Philadelphia, and both gained vital experience on the Philly jazz scene before braving the demanding world of New York jazz. They’re joined in the quintet by pianist Jeremy Manasia, bassist Adam Cote and drummer Jason Brown. Manasia, a leader in his own right, recently released his CD, After Dark, which All About Jazz called “an excellent group of originals and standards.”

Trumpeter Bruce Harris will be taking the stage for the “Battle for the Combos” for the second time. He performed last year in the first ever Generations Competition finals with the quartet, Interplay. Interplay, in fact, won that night, to earn the first ever Generations Fellowship. After that year-long experience, Harris is back wanting more, this time joined by tenor saxophonist Alex Hoffman, pianist Donald Vega, bassist David Wong and drummer Pete Van Nostrand. Vega and Wong are particularly accomplished for such young musicians. Vega, for example, played piano on Bennie Wallace’s 2008 CD, Disorder at the Border. Wong performs regularly with Roy Haynes and the Heath Brothers Quartet, and has played with the Vanguard Big Band and Lou Donaldson.

The Generations Jazz Program got off the ground last year at Yoshi’s San Francisco in rousing fashion, as the New York City-based Nial Djuliarso Quartet won the first annual Generations Fellowship in an on-stage dual over the sextet Meaningtone, from Purchase, New York. The Generations Band opened with a short set, then each finalist band played three numbers, with a fellowship riding on their performance. The standing room only crowd, fully won over by the Djuliarso Quartet’s rousing performance, rose to cheer the announcement of their victory. The following jam session, with all hands on deck from the Generations Band and both finalist groups, provided a stirring conclusion to a very special night.

That same energy is bound to be replicated when this year’s finalists square off on the Yoshi’s stage to see who will earn the prestigious Generations Fellowship. Once again, the Generations Band will open the show and join the young musicians on-stage for a jam session finale. This great show will be produced as a single night-long program. Tickets are $15.00 for the entire evening.

The Generations CD, Tough Guys, was welcomed warmly by jazz fans and radio programmers, breaking the JazzWeek Top 20 and gaining radio airplay across the country. Dick Bogle of the Portland Scanner said of the CD and the Generations Band, “All these men are deeply rooted in the jazz tradition and here together demonstrate what swinging is all about.” Ashante Infantry of the Toronto Star wrote, “They're serving up smoking interpretations of Cole Porter, Thelonious Monk and Antonio Carlos Jobim gems.” And Village Voice contributor Ken Franckling listed Tough Guys among his “10 Best of 2008.”

Tough Guys features the band’s original lineup, with Ronnie Mathews on piano and Marcus Belgrave on trumpet. Sadly, Ronnie passed away last year. But the Generations piano chair has been filled in extraordinary fashion by David Hazeltine, of whom famed jazz writer Ira Gitler says, “It is obvious to me that the hip-without-fanfare Hazeltine is a standout." At the same time, rising trumpet star Terrell Stafford came on board, replacing Belgrave. None other than McCoy Tyner calls Stafford, “One of the great players of our time.” In December this new lineup gathered in New York’s historic Clinton Recording Studio to lay down tracks for their second CD, which is scheduled for an early May release.

A ground-breaking education program focuses on the band setting

The Generations Jazz Competition and Mentorship Program began in 2008 under the guidance and inspiration of SF State School of Music and Dance faculty member Andrew Speight and Dr. Jeffrey Babcock, founding executive director of the ICA. The program is designed to help re-emphasize the historical importance of the jazz combo as a critical feature of jazz education and musical innovation.

For more information about the Generations International Competition for Emerging Jazz Combos, please contact Jerry Karp at (707) 895-2799 or [email protected] For more information about the International Center for the Arts, please contact (415) 817-4476 or [email protected] To learn more about the Generations Jazz Program, please visit us on the web.