Gene Rodgers: At the Astor 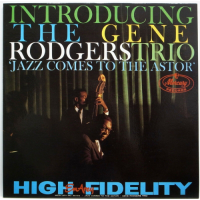 Gene Rodgers was the pianist on Coleman Hawkins' seminal recording of Body and Soul in 1939. For some reason, Rodgers didn't record nearly as often as he should have given his ability. Perhaps he preferred playing live rather than sweating re-takes in the studio. Or he wasn't as outgoing as others when it came to networking and bonding with producers. Or he slipped through the cracks and he became a secret. It's impossible to say.

What is evident is that Rodgers had enormous talent. He had a fleet attack that was reminiscent of Art Tatum, but he also could sound delicate, like Ahmad Jamal. His first 78 was made in 1929 backing vocalist Mamie Smith for Columbia. His releases in the 1930s and '40s were limited and included a session in 1931 with King Oliver when he was 16. Most of his 1940s output was backing Hawkins. Remarkably, Rodgers' first 12-inch leadership album, Jazz Comes to the Astor, was offered to him when he was 44 in August 1958 by producer Jack Tracy at Mercury. Tommy Williams was on bass and Ben Riley was on drums. The trio had been playing at the Hotel Astor's newly opened Broadway Lounge in Times Square in 1958 before the hotel was torn down in 1967. Hence the title of the album.

The album's songs are a smart lineup of standards plus two original blues: There'll Never Be Another You, Rodgers' Minor Impressions, All the Things You Are, Where Are You, All God's Children Got Rhythm, Lullaby of the Leaves, Rodgers' Just Some More Blues, Whisper Not and Frankie and Johnny.

Rodgers's other leadership albums include Gene Rodgers Plays Richard Rodgers for Mercury in 1959, Gene Rodgers With Slam Stewart and Jo Jones in 1972 for Black & White, and It Might as Well Be...Gene!, recorded live at Jacklin', a club in Zurich, Switzerland. And that was it.

My guess is that Rodgers was simply under the radar. According to Jack's liner notes:

I went to the New York's Composer's Club early last summer to hear another trio we were contemplating signing. They finished their first set, then Rodgers took the stand. From their first notes, it was apparent that this was a trio, not a pianist with a rhythm section playing together. By the second tune, the dinner audience had grown quiet and and was looking at the group with appreciation and smiles. They liked what they heard and they showed it. Some 30 minutes later, Gene agreed to join the Mercury roster and record this label. [Photo above of Jack Tracy by Chuck Stewart]

Why the relationship ended after two albums remains a mystery. I wish Jack were still around so I could ask him.

JazzWax tracks: The Gene Rodgers Trio's Jazz Comes to the Astor sadly never made it to the digital format. There are plenty of vinyl copies at eBay and at Discog.com

And here's Coleman Hawkins in 1939 recording Body and Soul with Rodgers on piano and his terrific keyboard opening...