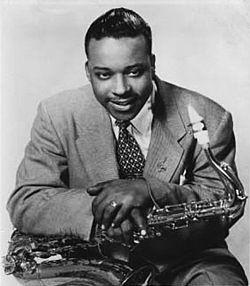 slideshow
Gene Ammons was one of the leading advocates of the Chicago sound of big brawny tenor saxophone and lush emotional ballads. Despite some personal problems that kept him off the scene a few times, he remained a vital and popular part of the jazz scene from the late 40's to the early 70's. This collection features selections from four albums he recorded for Prestige Records from 1956-1960. The first album covered in this collection is Groove Blues, with a very interesting lineup featuring John Coltrane playing alto saxophone for a change, and Jerome Richardson's flute adding a light and floating texture for the proceedings. Mal Waldron is on piano, and also wrote three of the four themes recorded o this album. Highlights include the lengthy “Ammon Joy" a theme that gives everybody a chance to step out and blow, and the standard “It Might as Well Be Spring.' Boss Tenor is one of Ammons best known LP's, and it is a stellar small band session with Tommy Flanagan on piano, Doug Watkins on bass, Arthur Taylor on drums and Ray Barretto on congas. Ammons own “Hittin' the Jug" and “Blue Ammons" shine a light on his beautifully robust tenor saxophone, do a couple of standards. Blue Gene brings Waldron back into the picture and the group performs four of his compositions. This album features Ammons in a medium sized band being supported by trumpet and baritone saxophone in addition to the rhythm section. These are mostly studio jam based tunes that the band could perform with little preparation or rehearsal. But they are all pros and flow through the mix of up-tempo cookers and ballads. Due to space issues on the compact disc, the final album covered, The Happy Blues has to omit a track, but the remaining performances are of a well recorded blowing session. This is a nice concentrated burst of some of Gene Ammons best playing at the height of his career in the late 1950's. Supported by some very fine talent, he plays with great depth and feeling. Fans of bluesy hard-bop will be much please by this re-release. Three Classic Albums Plus&#151amazon.com