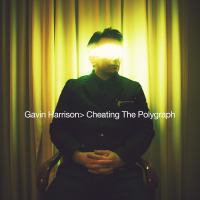 ENGLAND - Porcupine Tree drummer, Gavin Harrison, widely acknowledged as one of the finest drummers on the planet, has posted a Q&A video discussing his sparkling new solo album, Cheating the Polygraph. Acclaimed British jazz musician, Laurence Cottle, joins Harrison to explain the process behind their reimagining of such Porcupine Tree gems as “Heart Attack in a Layby," “Start of Something Beautiful," “What Happens Now?" and more, to be released in North America on April 14 via Kscope (April 13 in the UK, April 17 in Germany, April 22 in Japan).

Cheating the Polygraph is an ambitious project which sees the restlessly creative Harrison reimagine eight Porcupine Tree songs in a set of vivid and vibrant new arrangements that give full, free rein to his inquiring musical mind.

The tracks which comprise the album were recorded over a five-year period, with Harrison working in conjunction with a crew of some of the finest contemporary musicians, including the gifted saxophonist Nigel Hitchcock along with bassist Laurence Cottle. It's a set that will no doubt excite much controversy; Harrison's use of the 'Big Band' musical sound stage isn't some ersatz attempt to make a 'Swing' album; it's closer in execution and arrangement to the innovative works of Frank Zappa and The Mothers of Invention—a layered, richly-textured selection that is both beautifully-recorded and incisively delivered.

“I think every album needs a focus - a master plan - and whilst I thought about writing new tunes for a big band project, I made a version of Porcupine Tree's 'Futile' (with Laurence Cottle) and it came out really well," commented Harrison. “It felt like a good plan to follow on with some of my personal favorite PT songs and see if we could make them work. I had a vision that the arrangements would never lean towards a clichéd classic big band sound, but always follow a modern contemporary angle. So even if you didn't know the original tune, you could still enjoy it as a modern composition that would work with this instrumentation. I couldn't be happier with the results. Laurence Cottle's immense talent as a musician and arranger was mind blowing."

No respecter of arbitrary musical pigeonholing, Harrison doesn't so much ignore genre confines as smash right through them - Harrison states in his thoughtful liner notes: “It's very important to me to push the boundaries of music whilst respecting what came before. In the arrangements of these pieces we really get 'out there' with some of the harmonies and rhythms, and we vastly extended the edges of the original compositions."

Harrison also drops little musical depth bombs throughout by interpolating shards of melody and musical themes from other Porcupine Tree songs seamlessly into the musical patina of “Cheating the Polygraph," which serve to underscore his frontiersman spirit; this is some of the most enthralling, engaging and challenging music you'll hear in 2015, but there is also wit and charm in abundance here, too.

Stay tuned for more information on Gavin Harrison and Cheating the Polygraph, out this spring on Kscope.