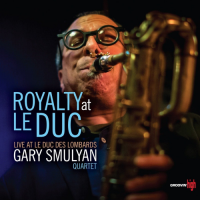 slideshow
There's nothing quite like a bad-ass baritone saxophone. Baritones tend to divide into two camps on the leadership side. There's the Gerry Mulligan approach, which sounds muscular and mannered. And there's the Pepper Adams school, an unchained approach that leaps on you like a panther. This low-register, uninhibited and gruff sound has its roots in the late 1940s with Leo Parker, Serge Chaloff, Harry Carney and Paul Williams but evolved in the late '50s with Adams's synthesis. I love Adams on Lee Morgan's The Cooker and Donald Byrd's By rd in Hand,not to mention many of his Byrd collaborations. Gary Smulyan falls into the latter camp.

As Royalty at Le Duc (Groovin' High) shows, Gary comes at the instrument from a bossy, brash, and forceful place. The album, which came out in January, was recorded live in 2015 at Le Duc Des Lombards in Paris. The Euro trio behind Gary is beautiful: The French Olivier Hutman on piano, French-Itlaian Michel Rosciglione on bass and Austrian Bernd Reiter on drums.

The album is exceptional and shows off Gary's chops on hard-bop scorchers and plaintive ballads. There are plenty of surprises. While Laura is taken nice and slow, Body and Soul becomes a medium-tempo waltz loaded with exciting pot-boiler twists and turns. The flag-wavers also are stunners. Thad Jones's Elusive and his bouncy Thedia are given high-octane treatments. Adams's Cindy's Tune, based on the chord changes to Honeysuckle Rose, features exceptional work by Gary and a terrific lengthy piano solo by Hutman.

Other ballads include Joe Henderson's Serenity and Duke Ellington and Billy Strayhorn's Star-Crossed Lovers, which was first recorded by Ellington in 1956. Both have plenty of heart and tenderness.

Once again, Gary has maximized his instrument. He holds nothing back and works hard to show off the baritone's animal instincts and brooding sensuality. I, for one, would love to hear Gary take on a set of Elmo Hope tunes.