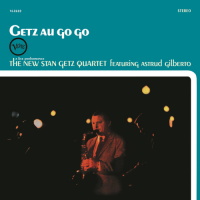 slideshow
On May 22, 1964, the Stan Getz Quartet with Astrud Gilbert appeared at New York's Cafe Au Go Go. Among the songs they performed was the Telephone Song, by Roberto Menescal, Ronaldo Bôscoli and Norman Gimbel. The gig was recorded for a live album released by Verve in December called Getz Au Go Go. Here's Gilberto singing the song.

Then in February 1965, to promote the album, the Stan Getz Quartet appeared on ABC's Shindig, the teen jukebox show broadcast from Los Angeles. But instead of Gilberto appearing, Ruth Price sang the Telephone Song in what appears to be one of Gilberto's signature Pilgram-collar dresses. Here are both clips...

What happened? Where was Gilberto? I reached out to vibraphonist Gary Burton, who was a member of the Stan Getz Quartet (and who is now on his final pre-retirement tour—go here for dates and locations). Here's what Gary said:

“Astrid was recovering from the flu and missed a couple of weeks of gigs. For the Telephone Song, the quartet wouldn't have been sufficient on its own, so Ruth Price filled in. And yes, that's Joe Hunt on drums and Gene Cherico on bass in the videoclip."