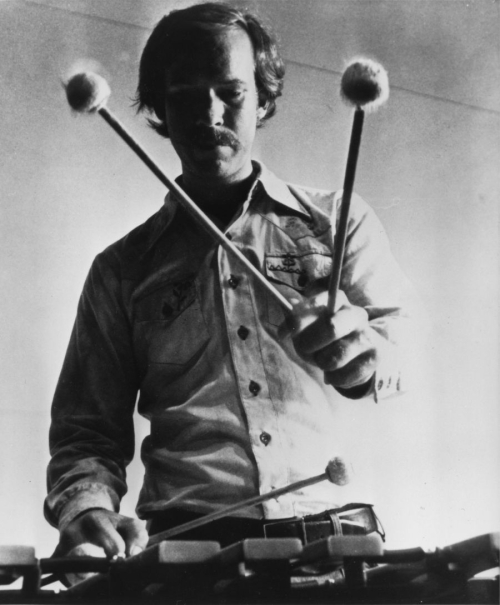 slideshow
Yesterday, I posted on Eddie “Lockjaw" Davis and Paul Gonsalves's 1968 album Love Calls. I noted that the recording along with two other RCA gems by Davis in the late 1960s were produced by Brad McCuen. Then I provided some bio information about McCuen and mentioned that he had produced eight of vibraphonist Gary Burton's superb albums from that same period. The list includes Duster, a groundbreaking album from 1966. After my post went up, I received an email from Gary:

“Marc, you struck a nostalgic chord bringing up Brad McCuen. What a sweetheart of a guy. Brad made his reputation at corporate RCA by coming up with and executing a very profitable series of re-issues. Being a long-time industry guy, he resurrected dozens of old RCA records in the vaults, and touched them up for release in the LP format. They were dirt cheap to produce since all the production costs had been written off decades earlier. So even though they sold at a bargain price, the income was almost pure profit for RCA.

“When I first came to the attention of RCA in 1960, Brad was known as a jazz-loving insider with a long knowledge of the company. That year, when RCA took a chance on signing a 17-year old jazz vibraphonist, at the suggestion of Chet Atkins from their Nashville division, it presented them with an interesting question: Who should produce me. George Avakian worked on three of my first four albums and Marty Gold produced one, too. Then George moved on, and the powers that be had to pick someone else. By 1964, RCA was barely doing anything with jazz. By default, Brad was the logical producer for me. He didn’t try to be my producer. He helped me produce myself.

“I would tell Brad my next idea for a project and he would help me work the company levers to get the studio time, the funding, and the support all along the way. At the actual sessions, Brad would be in the booth offering only encouragement and dealing with any issues that came up. He loved the music and really encouraged me to follow through on whatever inspired me.

“He occasionally brought ideas to me, usually something that came up through other channels of the company. In 1964, the label acquired the rights to put out the film soundtrack of The Sound of Music, with the provision that the label would record several more versions of the show's songs. So someone thought about making a jazz version. Jazz versions of musicals had become something of a genre after Shelly Manne had big success with his My Fair Lady album in 1956.

“I tackled the score with enthusiasm, but The Groovy Sound of Music was one of the most problematic productions of my career. I had planned to do half the record with a jazz sextet—with guys like Bob Brookmeyer, Phil Woods and Jim Hall. The other half was was going to be a string section backing Jim Hall and me as the only two soloists.

“I chose my friend Gary McFarland, an up-and-coming arranger, for the string writing. The first problem was McFarland’s writing. It was bland and seemed below his standards and reputation. The second problem was Jim being pulled away by a family emergency. He called the morning of the first day of recording to say he couldn’t make it, that he was sending Joe Puma. Joe was fine but he wasn't Jim Hall. Jim promised he would make it the next day to finish up the session. But when it came time to start the second day, Joe turned up again. My project was built around Jim's sound, and I had no Jim. I was devastated. If I could, I would have gone out and bought every copy so no one else would hear it.

“Another idea Brad passed on to me came from RCA's classical division. Their Red Seal department was quite prestigious. Their idea was to create a jazz and classical combination. Roger Hall, who was in charge of all things classical then, asked who I wanted to work with from their stable of artists. I didn’t have a wide knowledge of classical artists then, but I was a fan of the Guarneri String Quartet, who were on RCA. He thought they might be open to a collaboration.

“He then asked me for ideas on composers. I was really limited there, since I only knew dead ones. However, I had recently seen Samuel Barber’s opera, Vanessa, at the Met and was a big Barber fan. I said he was the only living composer I knew a little about. Just like that, Hall picked up the phone and called him. I couldn’t have been more surprised if he had picked up the phone and called Mozart!

“The bigger surprise was that Sam Barber was interested in the project and wanted to meet me. That started a nearly year-long friendship. We'd get together to talk about the upcoming album and life in general. Barber wanted to learn from me how improvisation worked. We spent numerous afternoons at his house in Mt Kisco, N.Y., at Rachmaninoff’s piano. There, I explained how I used chord symbols and harmony movement on which to base melodies. Sam had inherited Rachmaninoff’s piano after his death. What a thrill to even touch it and play it. [Photo above of Gary Burton]

“Barber took to improvising pretty quickly. One day he asked me to invite my quartet to his house so he could try playing with us. That was a lot of fun. I brought up Larry Coryell, Steve Swallow and Roy Haynes, with Samuel Barber sitting in on Rachmaninoff’s piano! That was followed by a delicious Italian dinner courtesy of his Italian cook/housekeeper.

“Ultimately, Sam could never settle on financial terms with RCA, so we never went forward with it. But I have great memories of long, rambling discussions about life and music with the greatest American composer of his generation.

“Another innovative project Brad and I did was The Time Machine (1965). RCA had invented synching multiple tracks (called Sel-Sync), allowing for true multi-tracking instead of overdubbing, which gradually degraded sound quality with each additional overdub. My record, The Time Machine, was the second multi-track jazz record made. Bill Evans had already recorded Conversations With Myself in 1963, featuring three solo piano parts. I used bass and drums, and multi-recorded several vibraphone and marimba parts. Again, Brad loved the challenge of the project, which involved long editing sessions and convincing others we weren’t crazy.

As for Duster in 1967, I think Brad sensed more than I did that the album was launching a new jazz-rock genre. I thought it was just my band making our first record. It was only after the record came out that year and how people talked about it that I realized what we had done. I remember Brad being very enthusiastic at the sessions. I think he got it that this was something new before the rest of us did.

“Brad went all out to help me with Carla Bley’s A Genuine Tong Funeral. Carla and I were inspired by the Beatles’ Sgt. Pepper album. We wanted to create a jazz record in 1967 that wasn’t just a collection of tunes but a project possessing some kind of ongoing narrative. It was a much bigger undertaking than the usual quick two-day jazz-combo recording. Brad got permission for me to have a whole week of studio time and worked with us dealing with all the logistics of production. I came to realize that the brightest moments in his work day at RCA, were the ones he spent collaborating with me. We had so much fun working together.

“I was nearing the end of a contract period, and ready to re-sign with the company. RCA had a history of keeping their artists for decades. They told me I could expect to stay with the company my entire career. They liked that I had a nice, clean reputation, came up with original ideas, didn’t cost too much to produce, and so on. I read into that a sense that I was the token jazz guy, and they wouldn’t likely invest a lot to promote me.

“However, fate and corporate stuff intervened. Steve Sholes, the head of RCA Records, suddenly died of a heart attack. Then a corporate re-shuffling took place. New people were brought in and long-time guys were moved around or let go. Brad was on the list to go, after spending 30-something years at the company. Out of appreciation for Brad's long history with the company, they found him a job in Nashville working at a RCA-affiliated publishing company. He didn’t enjoy it much, but the job got him to retirement age safely. [Photo above of RCA's Steve Sholes and Elvis Presley in 1963]

“Anyway, just as I was up for contract renewal, Brad left the company, and I realized I was the only jazz artist left. Duke Ellington had moved on, as had Sonny Rollins, my two jazz label-mates during much of the time I was at RCA. I sought the advice of my long-time mentor, George Wein. He introduced me to Nesuhi Ertegun (above) at Atlantic, and I quickly moved over to the label for the next five years.

“Looking back, my eight years at RCA got me through my college years, my sideman years, the launch of my own band, my jazz-rock phase and some of my more important recording experiments. I owed a lot to that company and to Brad for the opportunities they provided me.

“Throughout my years with Brad, he seemed to have total confidence in me—more than I had in myself. Whatever project I came up with, he saw it as his role to help clear the way through the corporate processes to make it happen. When logistical problems surfaced, Brad would get right to it and fix things. Those hurdles included getting us more studio time, the right engineer, dealing with the art department or the publicity guys. He ran interference for us and fought for what we envisioned. He never spoke about the music itself, as I recall. By contrast, Manfred Eicher at ECM often got into the details of the music, something at which he was very skilled.

“Brad didn’t so much serve as my producer, in the traditional sense, but supported me and showed me how to produce myself. The two people who taught me the most about producing were Brad and Manfred, and they couldn't have been more different. I had the good fortune to meet them at the right times in my career."