On 'Diablo en Brooklyn,' we went back to the essence of the sextet. The six core members. This album represents what Afro-Peruvian jazz music and a bicultural ensemble can contribute to the world. 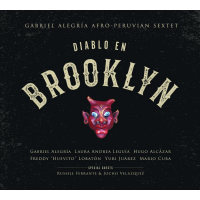 Gabriel Alegria has dedicated his life to introducing audiences to jazz-infused interpretations of traditional music from his Peruvian homeland, Afro-Peruvian arrangements of works from the Great American Songbook, and original compositions inspired by both styles. On Diablo en Brooklyn, the sixth recording by Alegría’s Afro-Peruvian Sextet, the ensemble presents what is without a doubt their most fully realized and boldest album to date. It is also the first to be made entirely in Peru and, most notably, at Lima’s legendary IEMPSA Studios—a landmark in the production and distribution of Afro-Peruvian music that was founded in 1942. The new CD will be released by Saponegro Records on September 22.

Trumpeter, composer, bandleader, and educator Alegría has long committed himself to being the standard-bearer of Afro- Peruvian jazz in the U.S. and, over the past 12 years, has brought this music to American audiences through both recordings and concerts. Diablo en Brooklyn was loosely inspired by the Peruvian “Son de los Diablos” tradition going back to colonial days and featuring a parade of mock devils down the city streets of Lima. Alegría, who has lived in Coney Island for the last decade, got the idea to musically transport that tradition to his Brooklyn neighborhood after being exposed to the diverse sounds emanating from the “speakers on wheels” residents roll out to street corners every summer along with their barbecue pits.

“You can’t really hear anything but bass,” he says. “But over the months, on my way to pick up my daughter from daycare, I would hear bass lines that I really liked.” They show up integrated into the Peruvian panalivio and festejo grooves at the heart of his four-part “Brooklyn Suite.”

In an intriguing departure from standard sequencing, the four movements of the studio-recorded suite are interspersed among four live tracks: three originals featured on previous albums and a 12-minute version of “Summertime,” the “hit single” from the band’s 2008 debut recording Nuevo Mundo.

That the musicians in the Afro-Peruvian Sextet have been playing together for years is evident from their finely-meshed performances and the facility with which the players blend traditional Peruvian rhythms and American jazz. Saxophonist Laura Andrea Leguía, master percussionist Freddy “Huevito” Lobatón, bassist Mario Cuba, drummer Hugo Alcázar, and acoustic guitarist Yuri Juárez tackle the challenges of the polyrhythmic grooves with an energy that is infectious.

Alegría and company celebrated their decade together in 2015 by inviting a stellar cast of guest artists including Ron Carter, Arturo O’Farrill, and Yellowjacket Russell Ferrante to play on their last release, 10. Alegría explains that on Diablo en Brooklyn “we went back to the essence of the sextet. The six core members. This album represents what Afro-Peruvian jazz music and a bicultural ensemble can contribute to the world.”

Gabriel Alegría was born in Lima on June 11, 1970. His grandfather, Ciro Alegría, was a famous, politically involved novelist (Broad and Alien Is the World) who spent half his life in exile in Cuba and Chile because of his political views. Gabriel’s father, Alonso Alegría, is a prominent playwright (Crossing Niagara) and theater director. Rebelling from the predominantly classical music tastes of his father, Gabriel got into rock and pop via albums by the likes of the Police and Genesis, but when it came time to choose an instrument for the school band, he picked the trumpet. It was in the band that he discovered jazz.

Alegría attended high school in Ohio, where his father was a visiting professor at Kenyon College, and then studied at the National Conservatory in Lima. He returned to Ohio to attend Kenyon College, after which he moved to New York, earning an M.A. in jazz studies at City College under the tutelage of Ron Carter. He subsequently moved back to Peru to play with the Lima Philharmonic. During his five years with the orchestra, and in side gigs in jazz and rock bands, Gabriel started to develop his concept of Afro-Peruvian jazz. In 2005, while completing a PhD in jazz studies at USC, he formed his sextet. Its first album, Nuevo Mundo (2008), recorded for his own label Saponegro (“black frog”), was produced by one of his mentors, trumpet great Bobby Shew.

Moving back to New York he got a major boost from Arturo O’Farrill, who contacted him about writing for his Afro-Latin Jazz Orchestra. The Afro-Peruvian Sextet recorded its second album, Pucusana (2010), followed by the live Afro-Peruvian Jazz Secrets (2012), Ciudad de Los Reyes (2013), and then its tenth-anniversary disc 10 (2015). That year the band won Hot House magazine’s “New York City Ensemble of the Year” award.

The Gabriel Alegría Afro-Peruvian Sextet is set to perform an ambitious CD release concert (10/21-22) at Roulette in Brooklyn with special guest Arturo O’Farrill and, direct from Lima, dancers Graciela Bramon, Javier Barrera, and Wendy Cotito, with choreography by Antonio Vilchez. The sextet + dancers will also perform two nights (10/25-26) at DePauw University, Greencastle, IN. Sextet only appears Fri. 10/27 at Merriman’s Playhouse, South Bend, IN; Sat. 10/28 at the Bop Stop, Cleveland; and Sun. 10/29 at Erie (PA) Art Museum.