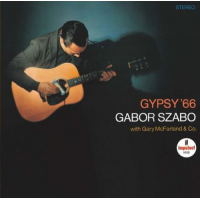 slideshow
Mainstream jazz in the 1960s had a distinct sound. Artists such as Paul Desmond, Jim Hall, Wes Montgomery, Wayne Shorter, Gary Burton, Bill Evans, Miles Davis, Horace Silver and others were influenced by the emerging young-adult scene that ran parallel to the teenage youthquake. Sixties jazz was eclectic and shaded by the revolution in pop music, in some cases stormy and pointed and in others gentle and mystical.

One musician whose contribution in the '60s and '70s is overlooked is Hungarian-born guitarist Gábor Szabó (above). An émigré who fled the Hungarian Revolution in 1956, Szabó settled in California before moving to Boston to attend the Berklee College of Music, where he began recording in 1958. He met Gary McFarland there.

By the '60s, Szabó's electrified acoustic guitar had a ringing folk feel and, as the decade progressed, he flirted with pop-rock, the avant-garde and world music. Several of his albums also set the tone for the fusion movement later in the decade.

The songs are Yesterday, The Last One to Be Loved, The Echo of Love, Gypsy '66, Flea Market, Walk on By, If I Fell, Gypsy Jam and I'm All Smiles. All of the tracks are caressing and stylish and many leverage radio hits of the day. Listening to the tracks, you can feel the young-adult pop movement—the loud colors, the flowing outfits, white sunglasses and boots, bolder advertising, Beatlemania, the VW Bus and so on. But you also can hear a coffeehouse, beatnik-y folk flavor throughout thanks to Watanabe's flute and Pozo's conga.

Szabó made many fascinating leadership albums, each one different. Several of his best were with arranger McFarland. In addition to Gypsy '66, they recorded The “In" Sound, Profiles, Simpatico, Dreams and Lena & Gabor (with singer Lena Horne). Also terrific are Szabó's albums without McFarland, such as Spellbinder, Light My Fire with Bob Thiele, Bacchanal, 1969 and Live with Charles Lloyd. That's McFarland and Szabó on the album cover above, in front of the Plaza Hotel on 58th St. and Fifth Ave.

If today's news has you dazed and confused, take a trip back to the cool '60s and early '70s. Just let Szabó's albums run in order. All hold up well and offer a sense of safe isolation and tranquility.

JazzWax clips: Here's The Last One to Be Loved...