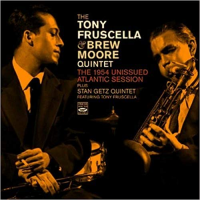 Trumpeter Tony Fruscella and tenor saxophonist Brew Moore were admired members of the generation that succeeded the pioneers of bebop. Lester Young was a direct influence on Moore’s tenor saxophone style. Fruscella was less identifiable in terms of models, although it was clear that early Miles Davis had an effect on him as, indeed, Davis had on Chet Baker and many other trumpet contemporaries. Fruscella was one of the young lions of the New York jazz scene in the late 1940s and early ’50s. Moore was active in New Orleans in the early forties—he later called it his “training ground—then in New York. Later, he was in demand in San Francisco. Peripatetic throughout his career, Moore worked in Paris for a time with drummer Kenny Clarke, moved to Copenhagen, back to New York, then to Copenhagen again, where he died in 1973 after falling down a flight of stairs. Like Moore and so many others of their jazz generation, Fruscella had drug problems and died in 1969.

The intimacy of Fruscella’s tone and phrasing made him an attraction during his New York period in the fifties and helped inspire Atlantic Records to record him. The 1955 sessions resulted in the album Tony Fruscella, which became an underground favorite and was finally reissued as a 12-inch LP thirty years later. The “new” Fruscella-Moore album just issued was also recorded in 1955. The rhythm section was New York stalwarts Bill Triglia, piano; Teddy Kotick, bass and Bill Heine, drums. Preparation for the March, 1954, date was informal, as the preponderance of blues indicates. The two takes of “Bill Triglia’s Original,” with its interesting middle section, constitute an interesting compositional exception. The individuality and inventiveness of the soloists and are what matter here. We may learn nothing dramatically new about Fruscella and Moore, but we are rewarded with an hour of their music that until now has been all but unknown. I keep going back to the slow blues imaginatively titled “Slow Blues,” with a Fruscella solo as intimate as confidential speech.