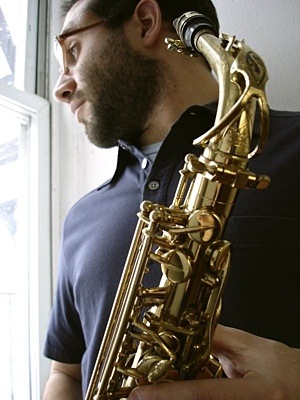 “[Robbins leads an] ambitious ensemble that combines spacious avant-gardism with the melodic punch of rock....[he has] a cool tone and a thoughtfully off-kilter sensibility." (NATE CHINEN, The New York Times)

“ . . . as a horn player Robbins has liquid timbre that can remind just how pretty modern jazz can be." (JIM MACNIE - The Village Voice)

“the vision and individuality of Pete Robbins...continues to show that jazz is alive and well in the new millennium." (MARK F. TURNER, Allaboutjazz.com)

“Pete can become a force. A real force. He's confident enough not to do what others might tell him." (PAUL BLEY)

Pete Robbins on the title Do The Hate Laugh Shimmy: “I'm not totally clear on how he (e.e. cummings) meant it, but to me 'doing the hate laugh shimmy' is a way to think about life in general: twisting and shimmying between hatefulness/negativity/bad vibes and laughter/love/positivity/acceptance."

Listening to Do The Hate Laugh Shimmy transports you into the distinct musical universe of alto saxophonist/composer Pete Robbins. It is filled with soaring sonic sculptures; ten singular Robbins compositions (that seem to delight his band judging from the zeal and ownership with which they interpret his tunes), peppered with his sprightly and beautifully-toned flights of improvisation on alto sax. With Do The Hate Laugh Shimmy (Robbins' 3rd release as a leader) this grant winning (Chamber Music America's prestigious “New Works: Creation and Presentation" grant), and critically applauded artist, offers a new chapter to the jazz cannon that reminds us of the vibrancy, originality and prolificacy that is so common in jazz today, particularly in his adopted home of Brooklyn. However, there is nothing common about this brilliant offering from Robbins. Do The Hate Laugh Shimmy, which borrows its title from a poem by e.e. cummings, is a highly unique vision/musical statement that has come together with superlative contributions from some of Robbins' frequent collaborators and friends: Sam Sadigursky (tenor saxophone), Jesse Neuman (trumpet, pedals), Craig Taborn (Fender Rhodes, Nord Electro), Eliot Cardinaux (Fender Rhodes, Nord Electro, loops), Ben Monder, Ryan Blotnick (guitars), Mike Gamble (guitar, pedals, loops), Thomas Morgan (bass), Dan Weiss, Tyshawn Sorey (drums).

Pete Robbins not only borrowed a title from e.e. cummings, but also some of the spirit in which the celebrated author created his works. Robbins music, much like a bulk of cummings' work, is intelligent, refined and virtuosic, while simultaneously audacious, idiosyncratic, and most of all emotionally and intellectually stimulating. On the opening track, “Fairmount," Ben Monder sets a haunting, melancholy mood that begins to paint a picture of feelings Robbins was experiencing during a particularly long winter. The tune unfolds into a soundtrack like melody with drummer Dan Weiss leading the burning rhythm section underneath the melody, and throughout Robbins' searching solo. The title track is up next, and with it an alternative interpretation of the “The Hate Laugh Shimmy" from Robbins: “To me, both the title and the different sections of the tune relate to the balancing of thought versus action in which we all engage to one extent or another. The song, for no reason in particular, starts and ends with the more intricate, brainy sections, and features the more cathartic, active section in the middle of the tune (after the drum solo)." “Anyway, and" “is all about straight-forwardness and clarity, despite all of the different voices that work independently throughout the song," said Robbins. He added, “moving forward, exploring the potential of very simple melodies is something that interests me compositionally. Craig's (Taborn) solo on this tune continues to blow me away each time I hear it." “Everyone Else is Disappointing" also borrows its title from an e.e. cummings poem, drawing on rhythmic and harmonic elements of rock music, where the saxophonist's earliest roots lie. In fact the entire album borrows from diverse elements equally. Much like our personalities being shaped from the infinite influence that everyday life bestows upon us; or the way cummings freely combined sonnets, blues forms, the avant-garde and the traditional into works that were unmistakably his own, Pete Robbins is a gifted artist that continues to blaze his own trail at the speed of sound with the upcoming release of Do The Hate Laugh Shimmy.

More on Pete Robbins: Pete Robbins was commissioned to adapt Assumpta Est Maria, as well as two other compositions, by Chamber Music America's prestigious “New Works: Creation and Presentation" grant (made possible by the Doris Duke Foundation). Robbins explains, “it was originally written as a vocal piece by the Italian composed Carlo Gesualdo, whose rapturously adventurous harmonic language influenced me quite a bit when I was just starting to write my own music. Assumpta is the only one of the three adaptations I worked on that I wanted to include on this album."

Pete Robbins moved to New York City in September, 2002, and immediately became a welcome presence on the creative music scene. He currently leads his group at such venues as the 55 Bar, The Cornelia Street Caf, Barbes, The Stone, The Tea Lounge, and others. He also plays regularly in Philadelphia, Washington D.C., and Boston, tours the U.S., and visits Europe with his group, featuring appearances at the Copenhagen Jazz Festival. In addition to the group heard on his previous CD release Waits & Measures (June 2006), Robbins also plays in more avant-garde projects with such musicians as Mark Dresser, Randy Peterson, Daniel Levin, Peter Evans, Kenny Wollesen and Mario Pavone. After stints in Boston and Copenhagen, Robbins now resides in Brooklyn.

in addition to his performing and recording pursuits, Robbins also curated a jazz series at The Cornelia Street Caf on behalf of the organization “Music for America" in 2004. M.F.A. is a partisan non-profit, promoting political and social awareness through live music. Groups featuring such jazz legends as Dave Douglas, Uri Caine, Ravi Coltrane, Bill McHenry, Rodney Green, John O'Gallagher, and others shared the bill with Robbins' own group at each concert. In September 2004, the Village Voice recognized Robbins' musical, promotional, and political efforts by naming him their featured jazz pick for the Fall season.

Saturday, May 17 - One Longfellow Square (Portland, ME) www.onelongfellowsquare.com