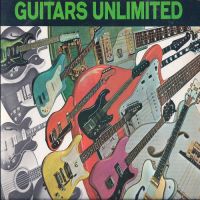 slideshow
In 1966, French guitarist Francis Le Maguer formed a quartet of electric guitars known as the Barclay Stars. The group, named for the French Barclay record label, included Le Maguer, Paul Piguillem, Pierre Cullaz, Raymond Gimenes, Victor Apicella and other players at different points and on different album tracks. At times, the group was expanded to a quintet.

By my count, the Barclay Stars released three albums in the late 1960s. The group's first album was called Guitars Unlimited, and from then on the ensemble was known as Guitars Unlimited, ostensibly to compete in the U.S. market, since the Barclay label was virtually meaningless in the States. Unfortunately, however, a group of West Coast studio guitarists—including Al Henderickson, Bill Pittman, Bob Bain, Dennis Budimir, Howard Roberts and Tony Rizzi—also recorded as the Guitars Unlimited at around the same time, releasing easy listening albums for Capitol, Phase 4 and other labels.

The French group was far superior. Their arrangements were jazzier and their collective attack was much more pointed and swinging. All five of their albums were superb, but today the releases are extremely rare and most have not been issued digitally.

The exception is Django Reinhardt Joue Avec Les Guitars Unlimited (1968), which translates as Guitars Unlimited Plays with Django Reinhardt. What they did here was use Reinhardt's original guitar line recordings and then overdubbed swinging guitar arrangements to flesh them out. Think Supersax Plays Bird, but with guitars playing Reinhardt. It works just as neatly. This album made it onto CD, which today goes for around $85.

With any luck, a label will release the Complete Guitars Unlimited on Barclay. The music is extraordinarily tasteful and beautiful, and remarkable by any measure.

You're in luck! It looks like someone has uploaded the entire Django Reinhardt album. Access the first clip, Nuages, here and then let the following clips from the album load automatically...