Freddy Cole Performs Two Concerts On May 31 In Phoenix, AZ

SOURCE: PATRICIA MYERS
May 5, 2012
Sign in to view read count 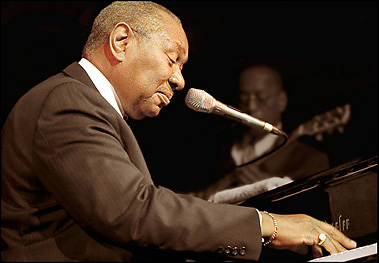 slideshow
The Freddy Cole Quartet will perform two shows on Thursday, May 31, 2012, at The Nash, the new Jazz in AZ education and performance venue in Phoenix, AZ.

The concerts, fundraisers to benefit the programs of The Nash, are at 5:45 p.m. for wine-hors d’oeuvres preceding 6:30 concert is $75; the 8:30 p.m. concert is $30. The Nash is at 110 E. Roosevelt St., Phoenix. Tickets, a seating chart and details on sponsorships are online at jazzinaz.org or phone 602-279-9402. Tickets and sponsorships are tax deductible to the extent of the law.

Lionel Frederick Cole was born in Chicago, Ill., on Oct. 15, 1931, the youngest of Edward and Paulina Nancy Cole's five children. Each of his three elder brothers, Eddie, Ike and Nat (12 years Freddy's senior), were musicians.

“I started playing piano at 5 or 6," Cole said. “Music was all around me." In the Chicago home of his youth, visitors included Duke Ellington, Count Basie and Lionel Hampton. He credits Billy Eckstine as a major influence.

Cole moved to New York in 1951, where he studied at the Juilliard School of Music, and earned a master's degree at the New England Conservatory of Music. He then spent several months on the road as a member of an Earl Bostic band that included Johnny Coles and Benny Golson.

It was back in New York that Cole laid the groundwork for a career that continues to flourish to this day. He developed a vast repertoire of songs in Manhattan bistros and concurrently began to supplement his live performances with television and radio commercial jingle work.

A resident of Atlanta, Ga., since 1972, Cole been a recording artist since 1952, when his first single, “The Joke's on Me,” was released on an obscure Chicago-based label. His newest CD is “Talk to Me,” preceded by “Freddy Cole Sings Mr. B,” which was nominated for a 2011 Grammy. A New York Times review stated, “Freddy has an impeccable sense of swing... he is, overall, the most maturely expressive male jazz singer of his generation, if not the best alive."