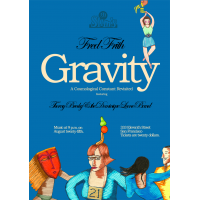 Imagine a world where dance, rock, punk and DIY music, experimental classical, prog and free improvisation mix like rogue strains of cultural DNA. Think of an environment where anything is game for musical consumption, and musicians and listeners cross paths in ways that would have seemed absurd only ten years before.

This was not the dawn of the internet, or even the rise of independent rock as we know it in the 1980s. It was the late 70s, all across Europe and America's urban culture centers— Brian Eno falling in love with both minimalism and No Wave; Kraftwerk and Giorgio Moroder bringing a new digital sound world to the dance floor; punk meeting reggae head on.

And It was a renegade guitarist named Fred Frith who united the worlds of complex formal composition, folk music and the propulsive force of rock.

Frith, who needs little introduction to fans of experimental music, was in the middle of a different kind of transition in 1979. Late of Henry Cow, and concurrently playing with Art Bears, he made the move from Europe to New York City. His legendary avant-prog outfit Henry Cow had been equal parts Zappa, Ayler and Webern, and the new environment inspired him to explore even stranger musical bedfellows. Gravity, the classic 1980 LP originally released on The Residents' Ralph Records, was the product of true cross-fertilization.

Frith's idea was to make a kind of “dance" music, using elements of rock, folk and all the other sounds he heard in both the Old and New Worlds. Gravity was immediately embraced by Frith's fans, and AllMusic has since called it one of his “most important guitar-based" albums. The record featured two completely different backing bands performing on each side of the record. Sweden's Samla Mammas Mamma (members of the original Rock In Opposition group, along with Henry Cow) played all of side 1 behind Frith, while the American avant-rock outfit The Muffins performed on side 2.

Frith will lead this band through Gravity in its entirety, throwing in a few Art Bears classics to boot. This will be one of the landmark concerts of 2012.