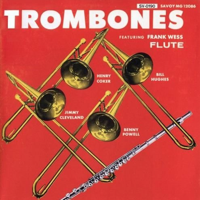 slideshow
One of my favorite small-group jazz albums of the mid-1950s is Frank Wess's Trombones & Flute. The album, recorded for Savoy in July 1956, paired Wess on flute with four trombonists—Jimmy Cleveland, Henry Coker, Benny Powell and Bill Hughes. They were backed by Ronnell Bright (p), Freddie Green (g), Eddie Jones (b) and Kenny Clarke (d). The gorgeous arrangements were by Frank Foster.

At the time, Wess, Foster, Coker, Powell, Hughes, Green and Jones were all members of Count Basie's New Testament band while Ronnell Bright would periodically sub for Basie into the 1980s. In 1956, to hold his band together, Basie let his musicians make extra money recording as leaders during the band's down time.

What we hear on this album is Foster setting Wess aloft on flute while unrolling a thick rubbery trombone cushion. In effect, these are Basie arrangements in minature. Two of the songs are Foster originals—Lo-Fi and You'll Do—while Wanting You and Don't Blame Me are standards, and Crackerjack is by Coker.

If you grab this one, you'll need the solo sequencing: The album was conceived and produced by Ozzie Cadena (above) and recorded at Rudy Van Gelder's studio at his parents' home in Hackensack, N.J. Wess was one of the first musicians to play jazz flute and his sense of swing on the instrument here is intoxicating. The addition of Green was a nice touch, since he not only adds dimensional time-keeping but also a Basie flavor. We also get to hear a sensational trombone section—both together and as individual soloists. And Ronnell is flawless as an accompanist and soloist—with tasteful chords and punctuation.

Frank Foster and Frank Wess (above) remain unheralded giants of big-band and small-group playing, as reed-section musicians, soloists, leaders and arrangers. Wess died in 2013 and Foster died in 2011.

JazzWax tracks: I hope you're sitting down. Frank Wess's Trombones & Flute is available as a download for $4.45 or as a CD for $5.95 here.

JazzWax clips: How good is this album? Dig for yourself:

And here's Wanting You (wait for it to kick in)...