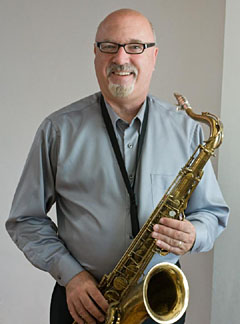 Featuring Macchia with the Prague Orchestra in a Sonic Jazz Journey

Cacophony, Inc. announces the January 15 release of Landscapes, Grammy-nominated composer/ arranger/saxophonist Frank Macchia's sonic travelogue around the world. Featuring orchestral jazz with saxophone improvisations, the music on the CD is composed and arranged by Frank Macchia and performed by the Prague Orchestra and conducted by Adam Klemens.

The CD focuses on an original six-movement suite for orchestra and sax called “The Landscapes Suite" that features imaginary destinations across the globe. Other music on the CD includes modern arrangements of folk songs such as “The Sidewalks of New York", “Shenandoah", “Deep River", “Down In The Valley" and “Way Down Yonder in New Orleans". Landscapes is the follow up to the critically acclaimed Emotions CD, which received a Blue Chip Award by noted jazz journalist Dr. Herb Wong and a Grammy nomination for “Best Instrumental Arrangement." Owen Cordle praised Emotions in JazzTimes magazine: “The folk song, “Black Is the Color of My True Love's Hair" is another thrilling mood piece... this combination of tenor soloist and strings is a lovely and substantive affair."

Born and raised in San Francisco, Macchia studied composition at the Berklee College of Music in Boston. After receiving a National Endowment Grant for the Arts in Jazz Composition and a Down Beat DB award for Jazz Composition he returned to the Bay Area and started putting out his own albums while working as a saxophone player. In 1992, he made the move to Los Angeles to fulfill his passion for film music. While working in the television and film music industry, his dream of composing his own projects never died. In 1997 he flew to Moscow to record his audio horror stories project “Little Evil Things" with the Moscow Symphony Orchestra and returned in 1999 to record with the same orchestra. Throughout his various projects, whether jazz, orchestral, R&B, big band, or film music, Macchia's singular voice comes through loud and clear. “When I got into town, Shirley Walker was kind enough to listen to my music. She told me, 'You've got a unique voice. Don't lose that. Just keep doing what you're doing.'" He took that advice to heart and has composed, orchestrated, produced and performed on 10 albums as a leader over the past 10 years.

Macchia has worked with Van Dyke Parks, Ella Fitzgerald, Brian Wilson, Clare Fisher, Yes, and the Tonight Show Band; composed and orchestrated on numerous films and television shows. He was the recipient of a National Endowment Grant for Jazz Arts and was a Sundance Labs Composer Fellow in 2004. His music for Wade Ballance's short silent film “The HusBand" will be featured at the Park City Film Music Festival in January.