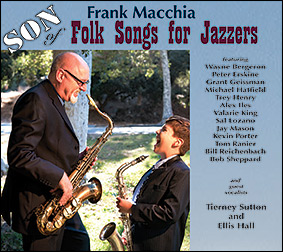 slideshow
Grammy nominated Composer/arranger Frank Macchia has received his third nomination for a Grammy for his interpretation of the classic American folk song “Skip To My Lou," in the Best Instrumental Arrangement category. The song is from his recent jazz CD Folk Songs for Jazzers, where he reinterprets traditional American folk songs.

Macchia has worked with Macy Gray, Ella Fitzgerald, Brian Wilson, Yes, the Tonight Show Band and composed and orchestrated on numerous films and television shows. He received Grammy nominations in 2007/2008 for his CDs Emotions and Landscapes.

SON of Folk Songs for Jazzers is currently available at Amazon.com, CDBaby.com, Frankmacchia.net, and retails for $13.98.