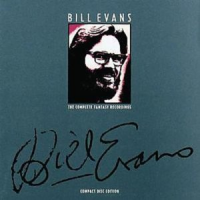 slideshow
CD box sets remain hot for classic jazz and R&B releases, since fans of the music like to hold something—anything—even if they have to take off their glasses and peer at the tiny type in the liner notes. Here are five box sets that I've been playing in steady rotation...

Between 1973 and 1979, pianist Bill Evans recorded 11 albums for the Fantasy label. During this meticulous period, he recorded in a variety of formats, including live (Tokyo Concert and Eloquence in 1973 and Montreux III in 1975), solo (Alone, Again in 1975), duet (Intuition in 1974), with Tony Bennett (in 1975), with his trio (Since We Met in 1974, Re: Person I Knew in 1974 and I Will Say Goodbye in 1977) and with a quintet (Quintessence in 1976 and Crosscurrents in 1977). The 12th recordimg was a previously unreleased Paris Concert in 1976. All are here. The 10th bonus CD in this set is his appearance in 1978 on Marian McPartland's Piano Jazz radio show. It's so exhilarating to hear these albums again, isolated in one complete listen. They're beautifully mastered, clear, technically perfect and splendidly breezy—further proof that Evans had no peers and won't likely ever have any. For some of us, this is the sound of the '70s, not jazz fusion.

This four-CD set is volume #4 of the label's Miles Davis Bootleg Series and covers eight live concerts at the Newport Jazz Festival. Bob Dylan may have had his moment at the Newport Folk Festival in July 1965 but Davis had his 10 years earlier on July 17, 1955, when his solo performance of 'Round Midnight won George Avakian's heart and a Columbia record contract that changed jazz history. It's fascinating to hear Davis morph from acoustic avatar to electric fusionist on this set. The only drawback is that he tended to rush performances and some of the later works today sound tedious and dated. The highlights for me are Now's the Time with Davis and Gerry Mulligan, and Bill Evans live behind Davis in 1958, with solos on songs like Fran-Dance; Straight, No Chaser; By e-Bye Blackbird and others.

Swedish baritone saxophonist Lars Gullin was deeply influenced by touring American jazz artists in the early 1950s. In addition to possessing technical ingenuity, Gullin also could swing in a Lester Young mode, placing him perhaps closest to Gerry Mulligan's lyrical style on the instrument. Gullin was at his peak during this four-year leadership period covered on four CDs. Here, he teamed with virtually all of Sweden's jazz giants in a wide range of configurations. Among the most exciting are Gullin with a big band conducted and arranged by Gösta Theselius in 1956 and a Gullin sextet fro the same year. Also, there's a superb octet session in 1960, when Gullin tended to played lower on his horn. Beautifully executed music with plenty of lyrical blowing and a slamming sub-basement attack.

Here's Gullin and crew on Baritonome from 1960.

This three-CD set covers selections from Little Richard's Specialty and Vee-Jay recording years, which ran from 1956 to 1965. The music is clear, forceful, restless and still electrifying, reminding listeners that Jerry Lee Lewis had serious hair-raising inspiration back in the day. Richard could swing like an amusement park ride and groove like a blues shouter, producing sizzlers like Shake a Hand, Keep a Knockin', Jenny Jenny and She Knows How to Rock. The set comes with a 36-page booklet.