SOURCE: SOMETHING ELSE!
October 24, 2011
Sign in to view read count 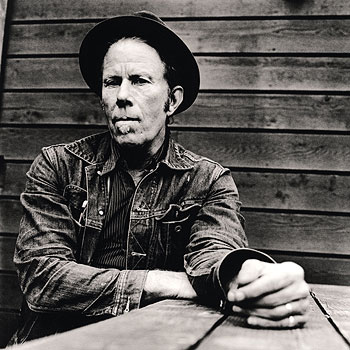 It's all boils down to pants. Blue jeans, specifically. See, back before we had “pre-washed," “stone-washed," “acid-washed" or any of them other variants, we had plain 'ole blue jeans.

And let me tell you...they were very blue and very tough. There was a lengthy (and somewhat painful) break-in process. Even after those first two or three washings, a nasty thigh-chafe could persist. To ensure a more perfect fit, some kids would go so far as to take a bath with their new jeans on, spending the rest of the day walking around in wet Levi's, creating a sort of custom denim body mould. In time, the harshness would fade and your pair of jeans would take on their true character. Each pair was different. Some looser (or tighter) in the seat. Some softer than others. No matter what break-in technique you used, sooner or later your jeans arrived at their ultimate state. They became your current favorite pair. More than that, they pretty much defined your idea of “blue jeans." Their “jeans-ness" had peaked (I told you this was obsessive).

The point here is not to toss out an easy cliché, comparing the music of Tom Waits to a well-worn pair of jeans. That wouldn't be fair to either Mr. Waits or the legacy of Levi Strauss. Plus, sometimes Waits' music just isn't all that comfortable.

No, what triggered memories of respectful blue jean husbandry was the idea that occurred to me after several listens to Waits' latest, Real Gone. It was that, like that perfect pair, this record defines Tom Waits' “Waits-ness."

Tom Waits is an artist who draws on so many aspects of culture, musical & sociological, United States & World, that you can think of him as a one-man melting pot.

So on this extremely Waits-y recording, we have field hollers mixed with turntables (Waits' son Casey, on “Top Of The Hill"), slinky guitar (Marc Ribot is all over the place, turning in some fine solos and atmospherics), sleazy blues ("Shake"), wacky & busted sorta-tangos, lots of junky percussion and stories of love, death, coping and lust.

And lets not forget Waits' voice. He caresses, croaks, screams and grunts his way through this big, beautiful mess. Hell, he even samples himself and uses it as a percussion element. It's fun and a little disconcerting, both the sound of it and the idea of Waits using modern technology (let's face it, what thing makes more “Tom Waits Sense": a sampler or the sound of a pipe wrench wackin' a trash can?).

Perhaps most shocking (and most American) of all are the bits of political musings. Though a very small part of the whole deal, they do hit their mark. The divided nature of our opinions regarding the war in Iraq (actually, war in general) are beautifully expressed in the form of a letter from a soldier ("Day After Tomorrow"):

You can't deny, the other side
Don't want to die anymore
Then we do, what I'm
Trying to say is don't they pray
To the same God that we do?
And tell me how does God
Choose, whose prayers does he refuse?

Real Gone may just be Waits' most focused album. It's not pre-washed, stone-washed, or any of that other faux-marketing nonsense. It's the real thing. Sincere and without pretense. Waits has, accidentally or not, produced a record so “self-iconic" that..well, cheap cliché or not...it really is like your favorite pair of jeans: well-worn, full of character and hard to improve upon.