SOURCE: SOMETHING ELSE!
April 5, 2011
Sign in to view read count 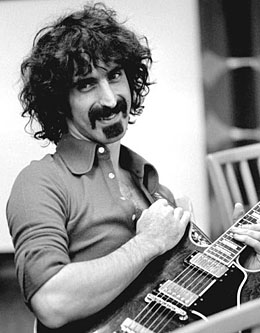 Listening to excerpted guitar solos is like viewing abstract art: It's a glimpse of something that doesn't necessarily have to make sense in the general definition of the term. Were we talking about most guitarists, an album of extracted solos would likely be a pretty dreadful proposition, but when it comes to Frank Zappa on Trance-Fusion, it truly is art&#151and it's truly abstract.

Few guitarists possess the skill or prowess to make their solos for the same songs sound entirely different from performance to performance, but that's just what Zappa set out to do.

Like a good artist, Zappa utilized the same tools day after day but, unlike most of his contemporaries, he never relied upon a preconceived solo for each song on tour. Instead, working like a painter, he tosses notes on his canvas in splishes and splashes, gesturing in broad strokes that created new compositions from his starting point songs. The results, sometimes slashing, as in “Butter Or Cannons," the chugging of “Ask Dr. Stupid," or the delicate, thoughtful tinkling of “After Dinner Smoker" and “Finding Higg's Boson" showcase the many textures and moods Zappa was capable of creating. That the solos are as imaginative and fascinating as the songs themselves speaks volumes for the creativity of the man.

But these are not songs per se—there are no traditional structures to hang onto, no choruses, few repeated elements, and little in the way of predictability. That Zappa would prefer it if you just allow these solos to just “be" is probably an understatement; they stand on their own, but Trance-Fusion really works best as a whole statement, best taken in one sitting where, instead of feeling like 16 naked solos, the album is allowed to unfold like a suite, progressing from one movement to the next.

For an album created out of unplanned guitar excursions from such a master of 6-string expression, why does it seem so surprising that it comes together so satisfyingly as a finale when the applause of closing track “Bavarian Sunset" fades out? Perhaps, to return to abstract painting, it makes more sense that instead of an end, it's simply that the canvas has only finite space.