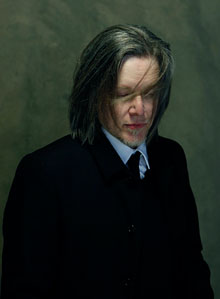 I have a sort of extra-sensory perception relegated solely to picking up the faint signals thrown off by the arrival of music I want in a music store at a specific location. Be it a brand new disc only available as an import or some equally hard-to-find domestically-released item, or even something I desperately wanted to find used, I will awake with an urge—no, urge is too weak a word&#151a need to hit up a particular music store, and it has to be that day.

Like a psychic who leads police to hidden evidence, I can't say specifically what I'll find, but I'll know it when I find it. More often than not, I am rewarded with exactly what I had been hoping to find. I must trust nature and the universe on this. I have been given a gift and must not abuse it by neglecting the call of music. When nature calls, you have no choice but to take the call. Nature won't leave messages on an answering machine.

Just before I picked up this David Sylvian remaster, I began to pick up the faint, weak signals of something special sitting in the racks of my local indie music chain store. I couldn't say specifically what it was, as usual, but I knew as the morning wore on that it was undeniable—music was calling out to me, and I must heed that call. I took off at lunch to meet whatever fate awaited me. I began my usual scan of the racks. I walk up and down each aisle, the most dedicated and thorough “just looking" browser you will find. I stumbled upon a few things that ticked lightly at my senses, but none of them were it.

Finally, I got to the S section, which yielded up a motherload ... the import-only Gone To Earth, in its originally imagined two-disc layout, packed with extra tracks in the form of new mixes for three album tracks. The discs came housed in a gorgeous, glossy digipak with some new artwork fleshing out the inside panels. What's more, they also had the three other remasters—Secrets of the Beehive, Brilliant Trees, and Alchemy: An Index Of Possibilities, and a quick check of the R section revealed a lone copy of the Japan-reunion-under-a-pseudonym Rain Tree Crow. What to do, what to do? I clearly could not afford all of these, or even a couple. Gone To Earth it was—not only is it my favorite, it also offered the most “bang for the buck" with what amounts to 7 bonus tracks.

One of the reasons the magic of this album is so strong is the choice of musicians Sylvian employed. For starters, three-fourths of Japan show up on various tracks (Sylvian, of course, but the others together only in pairs on a select few), bassist Mick Karn being the only missing member. King Crimson's Robert Fripp committed to tape some of his most alluring and emotional guitar work with Gone To Earth, but not to be dismissed is Bill Nelson, whose expertise at crafting unique shapes with his odd sense of guitar is equally important to the success of the set. Jazz flugelhornist Kenny Wheeler appears on two tracks, as does jazzy saxophonist (and fellow ex-King Crimson member) Mel Collins.

Gone To Earth was originally released in most regions as a single disc. Japan, for whatever reason, was blessed with the full, two-disc release as it was originally conceived. A moody, dark, lush album of mature art-pop, something was never quite right with the second half of the album. As ex-vocalist of the defunct new-wave godfathers Japan (watch and listen to any late-period Japan song and tell me Duran Duran didn't lift their look and most of their sound from the band), Sylvian had set out on a solo career to indulge the more artistic tendencies he had begun revealing in the later Japan releases. Not content to simply write singles, he had been steering the band toward deeper, less commercial waters and it was clear he needed to be unshackled from the environment of a band. After a solo “song" album that flirted with several genres and an album of more ambient explorations, Sylvian fused the two together for Gone To Earth. Record execs apparently felt the two halves of the album would be a burden to most listeners, so four tracks of ambient material were lopped off and the whole thing was released in compromised form on one disc. What I had not realized until hearing the album in its original form was how compromised it really was.

In this newly re-expanded edition, the ambient tracks are relegated, as originally intended, to a second disc, and the songs fill disc one. This original album's material timed out at just about 80 minutes, the limit of compact discs today, an amount of time which may not have been entirely feasible back in 1986 anyway. Either way, the material was intended to be listened to separately, but the idea of putting out a two-disc release by a relatively unknown foreign singer was probably too risky. After the track list trimming, piling the remaining songs together on one disc altered the atmosphere of the album, creating a very dark, almost depressingly heavy experience. Paired together, the ambient tracks drag the graceful beauty of the songs into unintentional somber. Separated, the two discs vibrantly come to life.

It's still not an album to play at any party, but the arc of disc one, from arty opener “Taking The Veil" and the angular title track to the uplifting hope of closing song “Silver Moon," reveals the romantic beauty of the original seven-track lineup. Disc two heads off into ambient territory, with some tracks being simply more instrumental in nature than ambient, but the overall effect is the gentle, contemplative essence of quiet that Eno intended when he slapped the name on his works.

Even with lyrics, the overall atmosphere of the whole of Gone To Earth can best be summed up by as “ambient," a term that has come to mean various misleading things over the years but here can be applied as the term was intended. This is a subtle, gentle, beautiful work of art, a rarity at any time in rock music's history but particularly today.