"Footprints: The Life and Music of Wayne Shorter" Now Available in Paperback

SOURCE: ALL ABOUT JAZZ PUBLICITY
February 12, 2007
Sign in to view read count 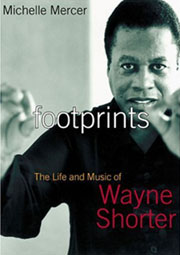 Expanded to include a complete list of Wayne Shorter compositions, annotated with fascinating facts

“[I]t's impossible to imagine a book that would give any better understanding of this enigmatic man." --Los Angeles Times

“Mercer's book is pleasurable and empathetic, essential for anyone who wants to get closer to this inscrutable genius." --The New Republic

The saxophonist and composer Wayne Shorter has done much more than leave his footprints on our musical terrain. He has created a body of work that stands as a monument to artistic imagination. Throughout the extraordinary trajectory of his fifty-year career, Shorter's compositions have helped define the sounds of each distinct era in the history of jazz. In addition, Shorter is a deeply spiritual man, a Buddhist whose practice is the key to his life and work. As his fellow musical great Herbie Hancock puts it: “Wayne Shorter has evolved as a human being to a point where he can synthesize all the history of jazz into a very special, very alive musical expression. Nobody else can do that now."

Written with Shorter's full cooperation and involvement, Footprints: The Life and Music of Wayne Shorter (Tarcher/Penguin paperback, March 1, 2007, $14.95) by Michelle Mercer, traces the musician's artistic and spiritual journeys. This biography, the first written on Shorter, provides rare insight into this eccentric fixture in the jazz scene, whose strange demeanor and love of comic books earned him the nickname “Mr. Weird."

In many ways, Shorter's story is the story of modern American music. Born in Newark, New Jersey, in 1933, he learned bebop as a teenager in cutting contests with Sonny Stitt and Sonny Rollins. In the 1950s, he graduated to some “hard-drinking, hard-bop years" with Art Blakey's Jazz Messengers, and gained a cosmopolitan perspective from his world travels as an ambassador of jazz with the group. He became, as Miles Davis put it, the “intellectual musical catalyst" for Davis's famous 1960s quintet and then followed the trumpeter on his electric excursions. In the 1970s, Shorter and Joe Zawinul pioneered fusion in Weather Report; it was at this time that Shorter began his transformative practice of Buddhism. Into the 1980s and 1990s, his charismatic solos graced pop tunes such as Steely Dan's “Aja" and recordings by Joni Mitchell and Carlos Santana. After the tragic loss of his wife on TWA flight 800 in 1996, Shorter emerged triumphant as the leader of the Wayne Shorter Quartet, a group critics have compared to Coltrane's classic quartet and Davis's groundbreaking quintet.

Today, in his seventies, Wayne Shorter is a living legend, “jazz's all-around genius, matchless in his field as a composer, utterly original as an improviser" (The New York Times). His influence in music and his uniqueness as an individual will be felt for generations to come. Composed of insightful musical analysis by Mercer, enlivened by Shorter's vivid recollections, and enriched by more than seventy-five original interviews musicians, friends, and associates, this book is at once an intimate biography, an invaluable history of music from bebop to hard bop to fusion to pop, and a moving story of a man's struggle to fully realize his musical gifts and his spiritual potential. A fascinating portrait of a great American artist, Footprints makes a vital contribution to the literature of music.

ABOUT THE AUTHOR: Michelle Mercer is a writer and an essayist for National Public Radio's All Things Considered. Her articles have appeared in The New York Times, The Wall Street Journal, The Village Voice, and Down Beat. She teaches writing at Fairleigh Dickinson University.