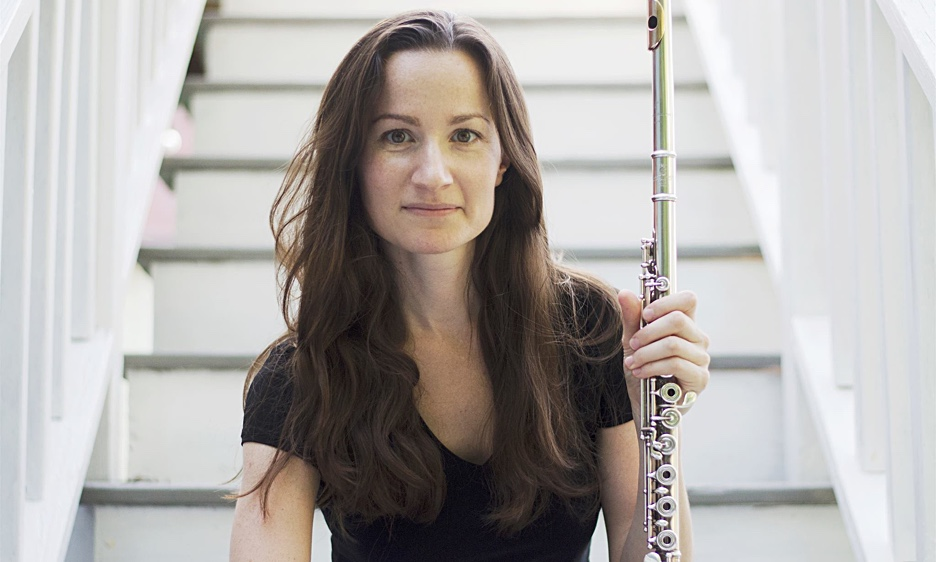 SOURCE: OUTSIDE IN MUSIC
June 3, 2020
Sign in to view read count

[Yulia] grooves as if she were a dual-native, balancing somewhere between Armenia and Argentina. —The Armenian Mirror-Spectator

Flutist and composer Yulia Musayelyan is truly a global citizen, and her music reflects this multiculturalism with a brilliance flowing from her respectful and masterful synthesis of international folk styles as she carries them forward into the fold of modern jazz. Unsaid documents a decade of learning, creating, and refining as Yulia and her music have grown to become a powerful voice that is far greater than the sum of their constituent parts.

Ten years passed since Yulia previously stepped into a recording studio as a bandleader. Unsaid , thus, is not simply a collection of music but an auditory history of Yulia’s growth and development as a musician over the course of a decade. The genesis of Unsaid begins with an opportunity: the prestigious Berklee College of Music, where Yulia is on faculty, awarded her with a week-long residency at Guilford Sound, a studio in Guilford, Vermont. The unique nature of this week-long residency provided an environment in which to create that was truly organic, allowing Yulia and her band to focus solely on their art, undistracted by the constraints of time, day-jobs, and finances. It was in this atmosphere of freedom that Unsaid came to life, and with it, a record was born that contains not only music but a microcosm of a true artist’s decade.

Unsaid , Yulia’s sophomore album and the album’s title track, draws on a duality of concept. The word “unsaid” may refer to something that cannot be accurately expressed through words, and thus another medium must be employed as a vehicle for the full weight of its emotional and intellectual content. Yulia describes it as “something fleeting and in the moment, understood or implied, though it remains unsaid.” On the other hand, “unsaid” may refer to an instance in which once one has spoken, acted, or played, the effects of those actions cannot be removed or unsaid. “[The effect] remains,” Yulia says, “and leaves all the implications and weight of that which has already been expressed, and leaves a permanent mark.” It is this multiplicity of meaning that Yulia knowingly plays upon to reflect the ambiguous nature of music. To any two listeners, no music will carry identical meanings and connotations, and in many cases, listeners draw not only differing, but contrary conclusions. Yulia’s goal with Unsaid is not to express something that is definite, but to convey that which remains unsaid when words fail.

Yulia’s compositions are eclectic in both style and influence. To attempt to categorize Yulia’s music is to water down the vision of her compositions and the concept of the album itself, for Yulia sees beauty in the nature of music as wordless meaning. “With instrumental music,” Yulia remarks, “the whole point is that it is a way of reflecting on the world without relying on words or concrete descriptions.” Yulia creates by drawing on the folk traditions of Argentina, Russia, and Armenia and seamlessly blending them with improvisation from various traditions, jazz harmonic concept, and a myriad of unusual time signatures stemming from both world traditions and her rich rhythmic imagination. The music contained on Unsaid, most of which is composed or arranged by Yulia, was refined by years of performance at various clubs and venues as the musicians in Yulia’s band worked and performed alongside her to create what Yulia calls, “a true collaboration.” Moreover, the nature of the recording session allowed for multiple takes, experimentation, and in the case of the tune The Raven, which had never been previously performed, variations in arranging and orchestration done during the session. While The Raven leans heavily on Russian folk music and lore, other compositions on this album are influenced to varying degrees by different traditions and artists. Numbers, a working title given to a composition while Yulia brainstormed the best way to notate its rhythms, is an example of a tune whose influence stems more from individual artists.

The flute, which trades solo phrases with the Fender Rhodes, pays tribute in its melody to the artistic concept of Kurt Rosenwinkel, while the asymmetrical seven and five pattern in the rhythm section resembles composer Guillermo Klein’s clave—a subconscious correlation that Yulia only noticed “after I wrote the tune and we played it a few times.” “Catch-22" and “Landscapes" are both compositions whose nature reflects the album’s idea of music conveying that which is left unsaid as words cannot do it justice. “Catch- 22," the opening track of the record, was originally titled in Russian; however, its Russian title “zakoldovannyj krug” loses some of its meaning and connotations when translated directly as “vicious circle.” When asked to elaborate on the meaning of the original Russian, Yulia explains, “It highlights the cyclical nature of things, the same way that a broken record keeps turning and turning, and turning, without any malaise… a consistent cycle that will never be completed, only interrupted.” “Catch-22" is written to sonically reflect the aesthetic of a broken record and all its sensations, particularly utilizing the drum solo over a vamp to encapsulate this cyclical nature. Landscapes is inspired by the painting “Vladimirka Road” by 19th century Russian painter Isaac Levitan, famous for his mood landscape works. Landscapes uses soundscapes to recreate and convey the essence of the painting, which Yulia describes as “open space, fresh air, and somber sky with moody clouds.” She further adds that, “In many ways, the beautiful and peaceful setting of Guilford Sound was in complete harmony with the imagery in this composition.”

When asked what she loves about the musicians on Unsaid, Yulia praises their flexibility, responsiveness, precision, and imagination. “Though rooted in my original compositions and arrangements, the group’s sound depends heavily on each musician’s unique contribution, especially in the intricate improvised sections.” She continues, “To me—improvised and interactive music is a very intimate endeavor… Listening is key: it enables us to create a collective feeling, an essence, in the moment.” Yulia Musayelyan’s Unsaid features pianist Maxim Lubarsky, bassist Fernando Huergo, and drummer Mark Walker.

Unsaid is an album that is intentional yet purposefully ambiguous. It is an album that defies musical description yet unmistakably uses the vehicle of jazz to propel its vision. Unsaid speaks and leaves a listener wanting more while pondering the profound unapologetic nature of a music whose soundscapes resound with an eclectic yet global beauty. In Unsaid one finds not only a decade of Yulia’s life, but a decade whose echoes will leave a legacy.

Unsaid releases on NextLevel, an imprint of Outside in Music on June 19th, 2020.

Yulia Musayelyan was born in Moscow, Russia and began learning music at age 4. Since then, she continued her studies, ultimately obtaining a BM in flute performance from the Manhattan School of Music, and an MA in Performance and Composition from New York University. She is currently a faculty member at Berklee College of Music. In addition to formal education, Yulia is also an experienced performer in Brazilian music and Argentinean folkloric styles and is a skilled improviser in all styles. Yulia has recorded as a sideman on over 20 records and is the recipient of multiple awards, including the 2001 National Foundation for the Advancement in the Arts Award. Yulia has performed in festivals and with artists of great acclaim in varying styles, including the Massachusetts Flute Choir, the Lexington Symphony, the TACTUS Contemporary Ensemble, and at the 2001 Montreux Jazz off-Festival, and multiple IAJE conventions. Yulia released her debut album as a bandleader in 2009 with Caminos, and in 2019 recorded the music for what is now Unsaid.