I feel it is my responsibility as an artist to be open, vulnerable and honest—in hopes of creating a space that allows the listener to do the same. —Elsa Nilsson 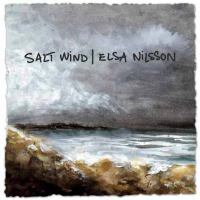 slideshow
Flutist and composer Elsa Nilsson's new album Salt Wind is a deeply personal expression with influences from every aspect of her colorful life. Born in Gothenburg, Sweden and raised by a California hippie, Nilsson had her feet planted in two very different cultures, leading her to seek commonalities wherever she can find them. She believes the true beauty of music is its ability to create common ground, and she weaves all kinds of folk music (including jazz) to find a deeper understanding between people and cultures. This cross-cultural philosophy is evident in her compositional style, subtly drawing from personal and universal elements to create a sound that is distinctly her own yet approachable from many angles.

Nilsson started her love affair with music in her father's ex-Navy choir and playing piano as a small child, but it wasn't until age fourteen, when her father broke his neck in a cycling accident, that music became Elsa's refuge and outlet for coping with her emotions. This reliance on music as a channel for expression and a source of comfort, along with her love of the wildness (which is also breathed into her compositions), led her to the flute.

After her early years traveling between Gothenburg and California, Elsa graduated high school and, just three days later, flew to Seattle with two suitcases and her flute to continue her musical studies. She received her Bachelors of Music from Cornish College of the Arts in 2008, and Master of Music from New York University in 2013. Now, Elsa is a freelance musician based in Brooklyn, NY, performing around New York City while touring in the states as well as Europe.

January 20th, 6.45, Pheonix Club in Anaheim
With Amanda Ruzza as part of Bass Bash for NAMM

“Elsa has a beautiful conception of melody and music."—Chris Potter

“Elsa's sound is strong, and she is expanding horizons as a flutist."—Jovino Santos-Neto

“Do you hear that sound from the Northern skies? It's Elsa Nilsson with something new, passionate and beautiful to say with her flute and her pen. Check out her music and let her light your skies."—Robert Dick, acclaimed flautist and mentor

“Elsa Nilsson is my favorite flutist of the Twenty First Century. She just blew my mind playing live with Amanda Ruzza on Som do Brasil at WKCR NY. From Jazz to the Folklore of Northern Europe nothing can stop her; she will go on. Next stop- Brasil!"—Jassvan DeLima, producer and Host- Som do Brasil WKCR-FM 89.9 NY