SOURCE: ALL ABOUT JAZZ PUBLICITY
April 1, 2008
Sign in to view read count 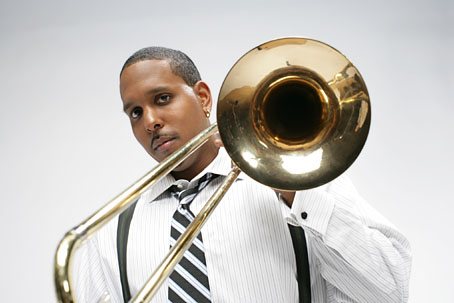 slideshow
Refusing to let the music die, the North East Florida Jazz Association (NEFJA) extended the auction of the Title Sponsorship to the 3rd Annual Legacy Jazz Festival for one more round of bids when there were no takers on the first round. The new item number is #150231217018 and the bidding will remain open until April 8 at 9:00 p.m. Pacific Time.

The quaint beachside county that, for two years running, was the fastest growing county in the US, now has the unfortunate distinction of having the highest unemployment rate in Florida. When the efforts of the volunteer organization to raise funds from local government agencies and businesses to produce their annual jazz fest proved less than successful, the group decided to put the title sponsorship on the eBay auction block.

“It really is a unique opportunity for an individual or a business to make a meaningful, long lasting and highly visible statement of the importance of the arts during these troubled times," said Muriel McCoy, President of the grassroots jazz society from her Palm Coast home. “Jazz is America's indigenous art form and we have a responsibility to keep it alive for future generations."

The Legacy Jazz Festival will be held in Palm Coast, FL on May 10 - 11 and features jazz greats like Freddy Cole, Eddie Henderson, Javon Jackson, and Vincent Gardner. Gardner is a former NEFJA scholarship winner and now performs with Wynton Marsalis' Jazz at Lincoln Center Orchestra as well as his own group. “Having Vincent come back as a headliner is a testimony to the work that NEFJA does," McCoy said. “Our scholarship was a vote of confidence for his talent and validation that carrying on the legacy is important musically and historically."

“The festival will go on," McCoy declared. “We just need a superhero who is passionate about jazz and understands the importance of passing on this legacy." By using eBay to market the Title Sponsorship, NEFJA was hoping to catch the eye of a cultural icon like Oprah Winfrey or former President Bill Clinton who's a major fan of the endangered genre.

The Title Sponsorship package will provide the winning bidder with a host of perks including a NEFJA scholarship presented in their name; a DVD of the festival documentary highlighting the Title Sponsor's involvement in saving the Festival; and a specially commissioned commemorative Legacy Jazz Festival sculpture created by Cuban expatriate and well-known ceramic artist Uldis Lopez Paredes whose work is on display in museums and distinguished private collections throughout the world.

Lopez Paredes, whose grandfather, uncle and cousins are musicians who knew Arturo Sandoval and originally introduced him to jazz, agreed to help the group because he believes that jazz represents the artistic freedom available in the US and to thank his new community for making him feel welcome. Before fleeing Cuba to be reunited with his family in Palm Coast, FL at the end of last year, Lopez Paredes was the President of the provincial branches of the Cuban Association of Artisans and of the Council for the Fine Arts, both in Pinar del Ro, Cuba.

“Uldis is a hero in his own right, “ added McCoy. “He's an extremely talented artist who has earned international acclaim. Now he's washing dishes to earn a living and creating his art on the side. He's sacrificed so much just to be in this country. The man is a genius with hardly any time on his hand and he's using that time to create this masterpiece to help us because he believes in America and Jazz--and what they represent. He is an inspiration and another reason that we won't give up on our sponsorship quest."

The North East Florida Jazz Association is a 501 (c)(3) non-profit organization dedicated to the perpetuation, performance, preservation, and promotion of jazz. In addition to bringing nationally and internationally known jazz performers to the local area, NEFJA awards scholarships to talented young students enrolled in a Jazz studies program at a Florida College or University