Firehouse 12 to Present the Michael Attias Quintet May 1st 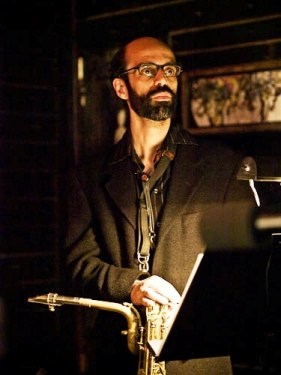 slideshow
On Friday, May 1st, New York-based saxophonist/composer Michael Attias will make his Firehouse 12 debut as part of the venue's ongoing 2009 Spring Jazz Series. Fresh off a two-week stint performing his original live electronic score for the Yale Repertory Theater's production of Dostoevsky's “Notes From The Underground" in late March and early April, Attias will return to New Haven with his new quintet. The group expands his longtime trio, Renku, featuring bassist John Hbert and drummer/percussionist Satoshi Takeishi, to include French horn player Mark Taylor and pianist Jacob Sacks.

Critics have called Attias “a significant new voice on the alto saxophone" (Michael McCaw, AllAboutJazz.com) and “an emphatically cosmopolitan saxophonist and composer" (Nate Chinen, New York Times). The All Music Guide's Scott Yanow adds, “His playing is both lyrical and explorative. While technically avant-garde, Attias does not neglect melodic development, close interplay with his sidemen, and swinging in his own fashion. His originals contain their share of variety, particularly in setting moods, and his playing clearly inspires that of bassist John Hbert and drummer Satoshi Takeishi, and vice versa."

An Israeli-born son of Moroccan parents who was raised in Paris and the American Midwest, Attias has built a career as diverse as his background. Based in New York since 1994, he has led a variety of his own groups, worked as a sideman in many others and composed scores for theater, dance and silent film. A former student of jazz legends Lee Konitz and Anthony Braxton, he is currently a member of such diverse ensembles as Amanda Monaco's Deathblow, Paul Motian Trio 2000+2, The Pavones and Positive Catastrophe, and he will appear on Hbert's June release, Byzantine Monkey, on Firehouse 12 Records. The Michal Attias Quintet's debut recording, Twines of Colesion, will be released later this year on Clean Feed Records.