SOURCE: CHRIS MAY
February 9, 2013
Sign in to view read count 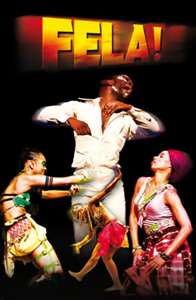 slideshow
The award-winning Broadway musical FELA! – which is bringing the life and music of Nigerian icon and Afrobeat originator Fela Anikulapo-Kuti to the world stage - will play Chicago’s Arie Crown Theater February 19 – 23.

An all-singing, all-dancing extravaganza in the best Broadway tradition, in other respects FELA! transcends musical theater convention. Escapism is replaced by gritty realism, compromise by authenticity. Kuti’s revolutionary politics are sympathetically presented, and his heroic story – marked by decades of brutal repression by successive Nigerian military regimes – is unblinkingly portrayed.

Crucially, the live band – which is onstage throughout the show – plays some of the fiercest Afrobeat to be heard anywhere in the world today. The core of the line-up is Brooklyn’s pioneering Afrobeat ensemble, Antibalas, whose trumpeter Jordan McLean and trombonist Aaron Johnson wrote the musical arrangements.

Set in Kuti’s legendary Lagos club, The Shrine, in the late 1970s, Kuti’s story is told through an audacious mix of music, dance, speech, and video projection. Contemporary newsreel footage adds historical verisimilitude. The enduring relevance of Kuti’s message is highlighted, as is the central role in his political awakening of two women: his mother, Funmilayo Ransome-Kuti, a prominent campaigner against British colonial rule in Nigeria, and the American black rights activist Sandra Izsadore, who Kuti befriended during an extended stay in the US in 1969.

Kuti’s mother died in 1978, as a result of trauma received when the Nigerian army sacked Kuti’s self-declared “independent republic of Kalakuta” the previous year. Aged 77, she was thrown by soldiers out of a second floor window.

Izsadore is still with us, and lives in the Los Angeles area. She is among many of Kuti’s family, friends and associates who have seen and enthusiastically endorsed FELA!.

Conceived by Stephen Hendel in 2001, following the serendipitous purchase of a Kuti compilation, FELA! is directed by the internationally renowned African American choreographer Bill T. Jones.

When it premiered Off Broadway in 2008, FELA! was an immediate hit. Against the expectations of many observers – who believed the production was too hard-hitting to succeed on Broadway itself - it went on to become the Broadway sensation of 2010, nominated for eleven TONY Awards and winning three of them. 400,000 people saw the show in NYC, along with another 100,000 in London (where FELA! became the first American musical to be presented at the prestigious Royal National Theatre). In 2011, the show was presented in Lagos to jubilant audiences.

The Chicago dates are part of a 14-city US tour which opened in Washington in late January and concludes in Seattle in early June. FELA! then travels to Moscow for the annual Chekhov International Theatre Festival.