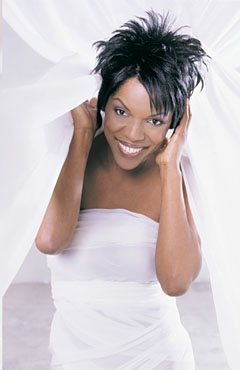 slideshow
FEINSTEIN'S AT LOEWS REGENCY, the nightclub proclaimed “Best of New York" by New York Magazine and “an invaluable New York institution" by The New York Post will continue its Spring 2011 season with the debut of six time Grammy Award nominee NNENNA FREELON from May 10 through 14. The show “Lena: A Lovesome Thing" honors Lena Horne's legendary music career, with a specific focus on her friendship and professional association with the composer Billy Strayhorn. It will feature his compositions such as “A Flower Is A Lovesome Thing" and “Something To Live For," in addition to other classics from Horne's diverse output. According to Ms. Freelon, “Lena Horne was an original. Elegance and a deep appreciation for expressing meaning in one's art, Lena Horne embodied style, grace and a respect for lyric. At the same time, she strove to make a statement in her music with class and dignity." Ms. Freelon will be joined by Brandon McCune on piano, Wayne Batchelor on bass and Adonis Rose on drums. All shows take place at the Loews Regency Hotel (540 Park Avenue at 61st Street).

NNENNA FREELON—hailed as the “international voice of Jazz"—has shared the stage or recordings with Jessye Norman, Herbie Hancock, Aretha Franklin, Ray Charles, Take 6, Al Jarreau, the Count Basie Orchestra and more. Her phenomenal performances have included the Grammy Awards telecast, Carnegie Hall, the Hollywood Bowl, the Monterey Jazz Festival, the Newport Jazz Festival, and concerts in Montreaux and London. After her recent Command Performance for Aretha Franklin at her birthday celebration, Ms. Franklin said “If you are looking for hip music, check out Nnenna Freelon."

Ms. Freelon was featured on the TV hit “Mad Men," the feature film What Women Want, PBS's “In Performance At The White House" to celebrate the 20th Anniversary of the Thelonious Monk Institute of Jazz, Variety's The Children's Charity, on the Jerry Lewis' Labor Day Muscular Dystrophy Telethon, on stage alongside The Roots performing in the hit musical Ask Your Mama, and for numerous charities and at special events such as at the Society of Singers' “Ella Awards," honoring the legendary Julie Andrews.

Her seventh Concord Records release, Homefree—released in April 2010&#151features a mix of tunes that she identifies as “feeling at home in your own skin," which bubble with the energy and creativeness that are hallmarks of Freelon's recordings. Her educational efforts in master classes, clinics, workshops and teaching students around the world from technique to life-skills have made her a sought-after spokesperson and lecturer, as well as motivational speaker.

FEINSTEIN'S AT LOEWS REGENCY will present NNENNA FREELON in “Lena: A Lovesome Thing" from Tuesday, May 10 through Saturday, May 14 with the following schedule: Tuesday through Thursday at 8:30 PM; and Friday and Saturday evenings at 8:00 PM and 10:30 PM. All performances have a $40.00 cover with $60.00 premium seats, in addition to a $25.00 food and beverage minimum. Jackets are suggested but not required. The club is located at 540 Park Avenue at 61st Street in New York City. For ticket reservations and club information, please call (212) 339-4095 or visit us online at Feinsteinsatloewsregency.com and TicketWeb.com.