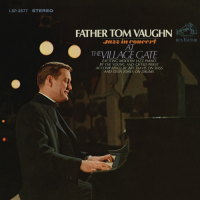 In the post-war jazz universe, two men of the cloth stand out. The first was Father Norman O'Connor, who was known as the “Jazz Priest." Boston University's Catholic chaplain in 1951, O'Connor was a board member of the first Newport Jazz Festival in 1954 and appeared in his priest collar when serving as master of ceremonies at festival concerts. He's heard announcing on Ellington at Newport (1956) and on John Coltrane's My Favorite Things: Coltrane at Newport (1963) and New Thing at Newport (1965). Over the years, he also promoted jazz on his Boston radio and TV shows. O'Connor died in 2003. Of course, there are plenty of other clergymen who have supported jazz and continue to do so today, such as the ministry at New York's St. Peter's church, located at the base of the Citicorp Tower in Manhattan.

The other priest who stands out was Father Tom Vaughn. Born in 1936 in Benton, Ky., Vaughn took piano lessons from his mother starting at age 5. Vaughn was 10 when the family moved to Pontiac, Mich., where he began taking formal lessons from a teacher who knew jazz pianist Art Tatum. Fortunately for Vaughn, he met Tatum while the blind pianist was staying with his teacher. By his mid-teens, Vaughn was playing jazz piano. After graduating from Eureka College in 1948, Vaughn began playing at local clubs before entering the Episcopal priesthood. In 1964, he became assistant to the rector at St. John's Episcopal Church in Midland, Mich. Jazz became a hobby.

While sitting in with a quartet led by drummer Gene Krupa in Detroit, Vaughn caught the ear of Newport Jazz Festival founder George Wein. George talked him into coming to New York, where Vaughn recorded his first album, Jazz in Concert at the Village Gate, in December 1965 for RCA. Teamed with Art Davis (b) and Elvin Jones (d) (Jones was a friend of the family growing up), Vaughn recorded The “In" Congregation, I Get a Kick Out of You, I've Grown Accustomed to Her Face, Chim Chim Cheree, Mr. Cholly, Get Me to the Church on Time, Where Is Love? and Softly, As in a Morning Sunrise.

You'll find this album and several others by Vaughn at Spotify.

JazzWax clip: Here's I Get a Kick Out of You...